After dithering for more than two years about how to respond to the recommendations of the Augar review of higher education funding, the government finally seems poised to take some decisions in the spending review announcement later this month. But any decisions are unlikely to fill the vacuum at the heart of its strategy for higher education.

This is not a government that does much strategy, preferring permanent campaigning with slogans like ‘get Brexit done’, ‘levelling-up’ and ‘building back better’ and displacement diversions like the war on woke.

The Augar review was commissioned because the then Prime Minister, Theresa May, was spooked by the lack of Conservative support among students in the 2017 election. By implication, high tuition fees introduced in 2011 were blamed, probably wrongly because there are many more substantial reasons why students, and many graduates, leant to the left. In its report in May 2019, the Augar review made a number of kind comments about the importance of further education. But its core recommendations were a modest reduction in the repayment threshold for student loans and a rather less modest reduction in the maximum fee from £9.2k to £7.5k.

The first recommendation addressed a new problem. Initially, student loans, provided by the Student Loans Company (i.e. the State), could be hidden ‘off the books’ on the grounds that notionally they were repayable. But a new ruling required the government to count loans as public expenditure (minus any actual repayments), which substantially increased an already large deficit in the public finances. The second recommendation, of course, addressed the perceived need to lure students back from their Labour (or Liberal Democrat/Green) allegiance.

But Augar presented the government with a challenge. The government did not want, in effect, to repudiate its earlier 2011 reform of higher education funding, i.e. high fees backed by (partially) repayable loans, and a return to direct public funding was – for a Conservative government – a non-starter (although Scotland has stuck with public funding of its universities). But the Treasury insisted that higher education funding be got back under control especially after the accounts ruling, as it became apparent that more and more graduates would not pay back much, if any, of their loans, leaving an increasing burden on taxpayers.

However, ministers do not want simply to restore an overall cap on student numbers, because its removal had been the big selling point of the 2011 reform (although it had not been finally removed until 2016). The problem they have is how to impose a de facto cap on numbers, and so restrain overall public spending on higher education, while not appearing to do so. As a result, a number of ideas have been floated, including the idea that students who did not meet state-mandated ‘minimum standards’ would be ineligible for loans. But the simplest solution, and the one almost certain to be adopted, has always been to raise the ‘price’ of a university education, not by cutting the maximum fee (an Augar recommendation that could be quietly shelved) but by reducing the repayment threshold for graduates. In effect this would impose a high marginal rate of taxation on new graduates earning just above the new lower threshold, a sure way to cool demand.

All along, the driver has been to contain, and if possible reduce, public spending on higher education. Even complaints about ‘underperforming’ universities and courses, and about graduates in ‘non-graduate’ jobs, ostensibly about upholding academic standards or ensuring value for money for students, have been rooted in the need to have as many graduates as possible earning enough to repay their student loans in full. A solution of sorts having been found, the problem of dressing this up as an actual strategy for the future of higher, and all post-school, education has been passed from the Treasury to the Department of Education.

The ‘big idea’ the latter has come up with is to claim to be shifting the balance from higher to further education, which, with a bit of effort, can be played into ‘levelling-up’. Not that further education colleges will see any significant uplift in their budgets, because any savings from curbing demand for university places will be pocketed by the Treasury. The whole point is that lower-level and shorter vocational courses in colleges are cheaper than degree courses in universities. But at least there will be more opportunities for hard-hat high-vis vest photo opportunities for ministers visiting colleges and meeting compliant apprentices.

As a strategy this is feeble stuff. On one level it can be seen as a vain attempt to roll back the gains of mass higher education over two generations, and try to reserve university education for an entitled elite and divert the lumpen mass to colleges. Of course, ministers will cry foul at such an interpretation, although it has more than a grain of truth. In any case, trying to ‘cool’ demand for higher education won’t work for two reasons:

First, it makes less and less sense to maintain an old-style binary distinction between higher and further education, except as residual bureaucratic categories. The reality is that we are moving rapidly towards a wider tertiary education system. The challenge is to produce flexible pathways within it. Ministers may have an inkling of this new reality in the planned lifelong learning allowance.

Second, there is a boundless appetite for higher education. The great majority of parents now expect their children to go on to higher education. Woe betide a government that appears to frustrate these aspirations. Like most developed countries, the UK is becoming a graduate society in which ‘going to uni’ is the norm.

So, the best strategy is almost the exact opposite of that contemplated by the government. The UK is only a middling (certainly not ‘world-beating’) performer in terms of participation in higher education, the key to building a high-skill economy (and a more inclusive democratic society). For example, Korea has a participation level around 80 per cent. We should embrace universal participation like Korea, and many other nations, not trash mass access. But this is a difficult ask in Brexity Britain where the best future always seems to be in the past. 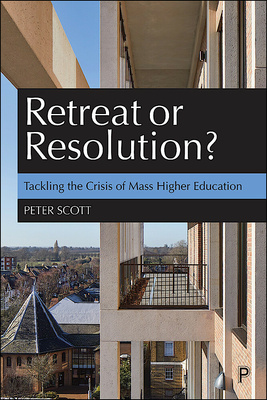 Retreat or Resolution?: Tackling the Crisis of Mass Higher Education by Peter Scott is available on the Policy Press website. Order here for £15.99.