Getting woke to woke capitalism

Woke capitalism is the contemporary phenomena where major corporations, CEOs and billionaires publicly and financially support political causes normally associated with the progressive left. The #MeToo movement, Black Lives Matter, same-sex marriage, climate activism and animal rights are just some of the apparently divisive political causes big business has backed in recent years. Supporters argue that corporations have responsibilities to their ‘stakeholders’. They contend that businesses should have a social purpose and should care for all the constituents who have a connection to them. By this view, woke capitalism, if done authentically, is desirable because the power and reach that corporations have today can be put to use to make the world a better place.

Not everyone agrees. Conservative critics have damned woke capitalism. They believe that weak-willed corporations are trying to appease dangerous socialists precisely because they fear what those socialists might be able to do if they are not placated. Reactionary pundits also claim that corporate virtue signalling is a sign of businesses playing politics when they should be sticking to their commercial knitting – after all isn’t business about making money rather than political do-gooding? By this account, businesses should stop sticking their noses into political arguments that are none of their business. Why? Because when they do it means that CEOs are using shareholders’ money to pursue objectives that have nothing to do with what a business should be focused on.

Essentially, we have two opposing positions. One, from a liberal-left position, agrees that corporations should genuinely support the broad interests of society rather than just focusing on shareholders. Another, from an economically right-wing perspective, believes that corporations should be purely commercial entities and not interfere directly in social or political matters. What these two positions share is a belief that woke capitalism signifies a genuine underlying change to the primary purpose of capitalist corporations. The difference between them is just about whether you believe that this is a good thing or not.

There is, however, a third position, and one that gets less airtime. Going woke is about ensuring that market capitalism can continue on the trajectory that it has been on for the past 40 years. It is about making sure there is no fundamental change. Despite the machinations of the reactionary right, it is worth considering the anti-progressive effects of both the rhetoric and practices of stakeholder-based corporate social purpose, especially when they are successful. It is not so simple as saying that woke corporations are hypocrites riding popular causes so that people buy their products. To get to the heart of what is going on, it is worth realising that when corporations do align themselves with progressive positions, they are generally focused on social change rather than any substantial changes to the structure or operation of the economy.

The minimum wage, aggressive corporate tax minimisation, income and wealth redistribution, scandalous executive remuneration and expanding economic inequality are almost entirely off limits to the woke corporation’s political agenda. A fundamental rule of woke capitalism is that politics that threaten the corporate bottom line are to be avoided at all costs. Even when corporations do align themselves with social causes, those causes are generally ones where the real activists have already done the hard work and been successful in influencing public opinion.

In a global economy where billionaires and large corporations hoard greater and greater proportions of the world’s wealth, the democratic promise of equality is being sacrificed. Human values of community, sharing and justice become regarded as quaint when faced with the inevitable consequences of an economic system based on the pursuit of greed. Woke capitalism buttresses a self-satisfied ruling elite who believe that their wealth is deserved. This all points to a more general facet of woke capitalism. No amount of feel-good moral conviction will allow a corporation to engage in a politics that will harm its own financial fortunes or that of its owners and managers. If we want real progressive change, it’s time to get woke to woke capitalism.

Carl Rhodes is Professor of Organization Studies and Dean of the University of Technology Business School. 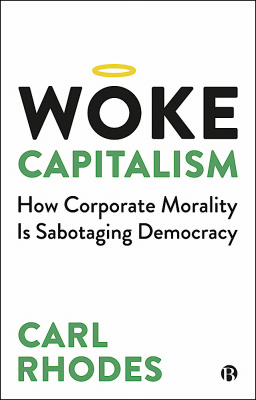 Woke Capitalism: How Corporate Morality is Sabotaging Democracy by Carl Rhodes is available on the Bristol University Press website. Order here for £15.99.