We all occupy different identities which are linked to social change. As a citizen we might campaign to elect a candidate whose policies reflect our ideals. As a volunteer we might spend nights answering a helpline, supporting victims of injustice through crisis. As an activist we might protest against social injustice with others on the streets. As a parent we might challenge the harmful gendered norms to which our children are exposed.

Each of these identities acts as a guide for the ways we create social change. Our identities shape how we understand social issues, how we conceptualise our responsibility, and the tactics we use to create change. Who we are is inextricably linked to what kind of world we want to live in and how we go about creating that world.

Our identities can also limit social change. Sometimes we get too fixed on who we are and who we are not. We so clearly define our role in social change, that we draw thick lines around our identities. The lines we draw can seem natural and harmless. But if our ideas about ourselves are static, that can limit how we work with others to create social change. For instance, being an ally to communities of colour in relation to the ongoing Black Lives Matter (and similar) work meant for many white folk voicing support in online communities and sharing resources. These actions were often done without directly engaging with communities of colour or active support. Reimaging being an ally as needing to be actively anti-racist by consciously unlearning racism in everyday life and advocating alongside communities of colour, however, could change how we create a world free from racism. Listening to others and questioning the lines of our identities can open up new possibilities for social change.

I had one of those experiences which caused me to redraw the lines of my identity.

As part of a research project, I occupied two identities linked to social change: academic and activist. I lived my life transitioning between those two worlds. On one side of the city, I was in academic territory: a university office, filled with books and papers. On the other side of the city, I was in activist territory: a feminist collective working with victims of domestic violence, filled with passionate debate and political action. As an academic, I assumed that my role was to produce methodologically rigorous knowledge to inform social change. As an activist, I assumed that my role was to engage in direct political action to oppose inequality. My daily journey between these identities was a bridge: a bringing of the best of both together by combining expert knowledge and passionate action. Two identities neatly defined.

Somewhere along those journeys, however, the bridge collapsed. The more time I spent with my activist colleagues, the more their work made me question my assumptions of who I was as an academic and activist and the lines I drew around expertise, knowledge and political action. My colleagues organised their activism on a (seemingly) simple assumption, that ‘women are experts in their own reality’. The collective saw itself not as ‘service providers’ offering women the expert help and knowledge they were lacking, but as servers who needed to follow the lead of women and learn from their reality. Not only did this position run counter to the majority view in the social services sector at the time, but it unsettled how social change could happen for victims of violence. The collective countered social norms which minimised or dismissed women’s experiences and their ‘follow my lead’ approach partnered in warmth and strength with women navigating cold, paternalistic public and social services.

I was undone by their work.

Their identities as activists caused me to reimagine my own. What could happen if I applied their approach to my academic identity? What if I erased, or at least blurred, that thick line I had drawn with expertise and knowledge on the side of academia and positioned activists and victims as experts instead? How could that have flow-on effects on how I engaged in political action as an academic? Reimagining academic activism as emotional and vulnerable work, learning from the stories of others who are experts in their own reality offered new pathways to social change. For me, questioning my assumptions about my role of the academic in social change led to novel ways of contributing to ending gendered violence.

The changes to our identities don’t have to be monumental. Even small shifts, small cracks in fixed ways of thinking about ourselves can open us up to new possibilities. What is key is that we embrace a vulnerability which allows us to be undone by each other and learn from others to reimagine who we are in relation to social change. As one of my colleagues said: “It isn’t just the ‘doing good’ factor, it is [about] what you might become”.

Ruth Weatherall is Lecturer in Not-for-Profit and Social Enterprise Management at the University of Technology Sydney. Her research uses feminist and queer perspectives and it is concerned with how social justice, particularly related to gender inequality, is achieved in and through not-for-profit organisations. 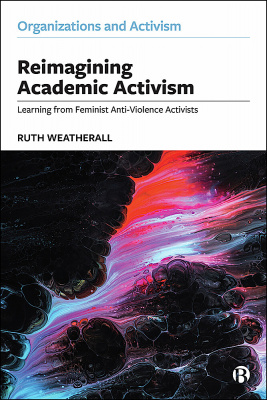 Reimagining Academic Activism: Learning from Feminist Anti-Violence Activists by Ruth Weatherall is available on the Bristol University Press website. Order here for £60.00 or order the EPUB for £21.59.