When Re-imagining Child Protection: Towards Humane Social Work with Families was first published in 2014 it touched the zeitgeist.

It spoke directly to the anxieties of social workers that ‘the family’ had become lost over a heavier focus on ‘the child’ as the object of protection. It posed the question, if we care so much about the child, why are we being so punitive towards their parents?

Recognising the highly-centralised, audit driven model of practice had hollowed out the relationship aspect of social work, the book had immediate resonance for those working within both policy and practice spheres.

Within the context of new government initiatives such as the Whole Family Approach and the establishment of the Principal Social Worker Network the book was warmly welcomed. The Principal Social Workers were a particularly supportive group. Holding positions of influence within local authorities, their interest in and adoption of the ideas expressed in Re-Imagining led to changes being implemented at the coal face of social work. Furthermore, being well-networked, these ideas were shared among the group and across the country.

The authors received invitations to speak at universities, local authorities and social work conferences where they continued to meet audiences hungry for a more hopeful and helpful method of working with families. In addition to speaking with practitioner, professional and academic audiences across the UK, the authors were invited to share their findings further afield in places such as the Republic of Ireland, Malta, Chile, Finland and New Zealand, achieving international reach for the work.

With the increasingly evident growth in poverty and inequality since the introduction of austerity measures in the UK, Reimagining also situated the work of child protection within a socio-political and economic context. It identified that the more punitive approach toward child protection was punishing the poorest and most marginalized people in society through the removal of children.

The hitherto more submerged aspect of Social Work, that of social justice, was thus foregrounded by the book and was strengthened by the award of a grant in 2015 by Nuffield to Brid Featherstone and Kate Morris to conduct research into poverty and child welfare inequalities.

The grant demonstrated the real heft of the book. Research the team were then able to undertake evidenced that the most deprived children were ten times more likely to be taken away from families than those in the least deprived areas in England.

Through another study conducted for the Family Rights Group, Featherstone and Morris were also able to further evidence a key message from the book – the need for a more humane approach to families. They talked directly with families, asking them, for the first time, how they would design agency involvement, tapping into resources and knowledge previously overlooked. The work revealed the complexity of a system which had families meeting with up to 9 different agencies. Managing the endless run of meetings was in turn creating stress and fracturing rather than supporting and strengthening the families the agencies were ostensibly trying to help.

A second book, Protecting Children: A Social Model, published in 2018 drew on this research and that of a fourth author Anna Gupta.

From publishing Reimagining Child Protection as a critique of the child protection system in 2014, to securing funding for further research, which underpinned the publication of Protecting Children: A Social Model, the authors of Reimagining have been and continue to be actively engaged with academics, practitioners, and policy makers in the UK and beyond, delivering rigour and support within the arena child and family protection. 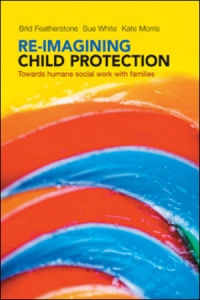