Should self-reliance still be a key aim of the international refugee regime?

What do we mean when we speak of ‘self-reliance’? This concept has been grappled with for centuries, ranging from the philosopher Ralph Waldo Emerson’s musings to more recent neoliberal efforts to dismantle the so-called ‘welfare state’ in the UK, US and beyond.

It is all the more complicated when we consider that most countries in the world are food insecure, heavily indebted to each other, and that we are living in the midst of a climate crisis with massive ramifications on food production, national infrastructure and in fact every other facet of life. At an individual level, when I talk about the concept of self-reliance, I am also quick to point out that I am heavily reliant on grocery stores.

The notion of self-reliance becomes all the more intriguing when considered from the vantage point of those purportedly dependent on humanitarian assistance – the so-called beneficiaries of humanitarian and development assistance. Refugees and displaced people are considered some of the world’s most vulnerable populations yet self-reliance has remained a key aim of the international refugee regime.

The UN Refugee Agency defines self-reliance as ‘the social and economic ability of an individual, a household or a community to meet its essential needs in a sustainable manner’. Its importance in contemporary policy efforts to support refugees is evident: ‘enhance refugee self-reliance’ is one of the four core objectives of the 2018 Global Compact on Refugees, the world’s foremost policy framework to promote refugee responsibility-sharing.

It also begs the questions: what is refugee self-reliance – and are efforts to foster it anything new?

Over years I have sought to help answer these questions through archival and contemporary qualitative research with humanitarian and development institutions and actors. My book, Refugees, Self-Reliance, Development: A Critical History, begins with 1920s Greece, expands into post-colonial Tanzania, Pakistan in the 1980s, Uganda in the new millennium, and ends with refugees’ access to global digital work in the 21st century. Through case studies spanning Sub-Saharan Africa, Europe and the Middle East, and a century of practices, I have examined the changes and continuities of refugee self-reliance and the assistance to foster it over time.

Continuity and change over a century of refugee work

I have found that since the 1920s, when the League of Nations instituted the first formal assistance for refugees, five key practices have consistently been used to attempt to foster refugee self-reliance: agricultural settlement, vocational training, micro-finance, public works and employment-matching. Refugees have also been involved on an ongoing basis in host country development projects as a way to foster their self-reliance while contributing to their host countries. This illustrates that refugees have long been considered developmental as well as humanitarian subjects – and also illuminates the way their own preferences and skills have been overridden in the name of larger goals.

Other changes in refugee self-reliance assistance have coincided with global trends including urbanisation, globalisation and dominant modes of economic thought. Over the last century, for example, the outcomes of refugee self-reliance assistance appear to have changed from largely agricultural subsistence farming (and in some cases surplus) in rural areas to a wage-based market dependency in urban areas: since the 1980s refugees have increasingly been incorporated into the informal working urban poor. This has important implications for refugee protection. More broadly, this history suggests that, as development has shifted from being considered an outcome created through state action to an outcome of market forces, refugee-serving agencies have shifted from working with the state to foster refugee self-reliance to supporting populations in the state’s absence. They have thereby increased their focus on directly integrating refugees into economies as a means of assistance and thus have remained important but problematic mediators in the relationship between refugees and work. This is evident through the emerging transition to promoting remote, digital livelihoods as a way to support refugees who may lack the right to work in restrictive host countries with high levels of unemployment.

Helping refugees achieve self-reliance has arguably become more important with the COVID-19 pandemic. Countries have redirected humanitarian and development funding and closed their borders, restricting two of the three so-called durable solutions of resettlement and repatriation. Only the third, local integration into host countries – which requires refugee self-reliance – remains within reach. With shrinking donor budgets for humanitarian and development work, the notion of refugees’ independence from humanitarian aid becomes ever more appealing for agencies and donors alike.

Yet far too often, ‘self-reliant’ refugees are impoverished and struggling to survive. Many of the Congolese refugees I interviewed in Uganda in 2015 had their livelihoods destroyed by government responses to the COVID-19 pandemic. Although Uganda had one of the harshest lockdowns in the world, it is notable that it did not take the weeks and months of the first lockdown, and then the second, to destroy these livelihoods. Instead, in under a week many people started to go hungry.

Stories like these – and of self-reliance assistance programmes failing to achieve their objectives – are widespread in the history I have researched. At the same time important work is being conducted today to expand the notion of self-reliance, to measure it and even to move beyond it through including refugees in social protection schemes and advocating for the right for refugees not to work. These are promising new phases in the history of refugee self-reliance assistance. As the global community continues to advocate for refugee self-reliance, it is imperative that the wider contexts – of outside interests, of economic and social trends, of political will – are more widely considered. Beyond all else, my book argues that refugees have not been a key determinant in the content or delivery of self-reliance programming. This misaligned trend in the track record of refugee self-reliance must change.

Evan Easton-Calabria is Senior Researcher at the Feinstein International Center, Tufts University, and Research Associate at the Refugee Studies Centre, University of Oxford. 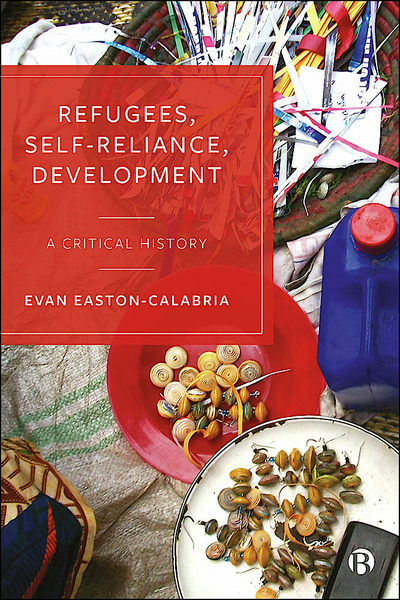 Refugees, Self-Reliance, Development by Evan Easton-Calabria is available on the Bristol University Press website. Order here for £13.49 for this week only, or £26.99 any other time.