Why is the United Kingdom so obsessed with ‘bespoke’ refugee schemes?

Priti Patel, the Home Secretary, told the UK House of Commons on 28 February 2022 that a ‘bespoke humanitarian route’ was being introduced for those fleeing the unlawful invasion of Ukraine by Russia. In the month that followed, some 25,000 visas were issued. It sounds impressive, at least until one considers that over 4 million refugees have fled Ukraine, 2.4 million of whom travelled to one country alone, Poland.

Boris Johnson, the Prime Minister, told the House of Commons on 18 August 2021 that a ‘bespoke resettlement scheme focusing on the most vulnerable, particularly women and children’ was being launched for Afghans. Around 16,500 Afghans were subsequently evacuated. Again, it sounds impressive. But there are 2.6 million Afghan refugees worldwide, 2.2 million of whom reside in Pakistan.

Curiously, neither the Home Secretary nor the Prime Minister could bring themselves to use the word ‘refugee’ in their statements. That seems to be a matter of deliberate policy. The present government is touting the idea of ‘bespoke’ national schemes for selected groups as an alternative to the international regime of refugee rights represented by the Refugee Convention.

The Nationality and Borders Bill currently before Parliament will for the first time criminalise all refugees arriving in the United Kingdom in small boats and lorries. Ministers have said that prosecutions will be brought only in cases where there are ‘aggravating factors’, as if it is acceptable to criminalise a large group but then select only a subset for actual prosecution. The Bill also empowers the government to treat those refugees worse than others by offering shorter periods of asylum, reduced rights to family reunion and even to offload them to some other country, if any country can be found willing to agree to this. The idea is supposedly that refugees will be deterred from travelling without prior authorisation.

This approach of offering asylum only to comparatively small numbers of selected refugees determined at a national level is exactly the disastrous approach which was prevalent before the Refugee Convention was adopted. It was supposed to consign this fragmented, discretionary system to history.

International refugee law first emerged after the First World War. Millions of refugees fled from revolution, persecution and then famine in Soviet Russia. With the entrenchment of the nation state model in Europe, it was no longer possible for them to simply leave one country and settle in another as refugees always had in the past.

In 1921, a League of Nations High Commissioner for Refugees was appointed – the Norwegian Fridtjof Nansen. By lending his name to the ‘Nansen passport’, he was to become eponymous with refugee protection in the interwar years. There were hundreds of thousands of Russians destitute on the streets of Europe and beyond and their plight was worsened by Soviet legislation that stripped them of their citizenship. They were soon joined by Armenians, and then, in the 1930s, by Jews.

The first attempt at a protective treaty was the Convention Relating to the International Status of Refugees in 1933. Only a handful of states signed up to it and it was insufficiently flexible or robust to offer protection to the many refugees by then fleeing Nazi persecution. Another ineffective convention was agreed in 1938 and this was followed by a further abortive effort at the Evian Conference in 1938. Governments were unwilling to agree to binding commitments. Like the present government of the United Kingdom, they preferred to offer what we might call ‘bespoke’ schemes over which they could exercise full control but which assisted very limited numbers.

Many died as a consequence. The Kindertransport are sometimes feted, for example. But those few children were orphaned because their parents were refused entry.

After the Second World War, the international community tried again. Tens of millions had been displaced: what is now sometimes called a ‘mass influx’ situation was very much in everyone’s minds. This time there were two outcomes: the office of the United Nations High Commissioner for Refugees (UNHCR) and the Refugee Convention itself. The new convention included binding commitments. But they were moderate ones which carefully balanced the humanitarian and human needs of refugees with the sovereign right of nation states to control their own borders.

The Refugee Convention does not impart a right of entry to a country of the refugee’s choosing; but it does prohibit a state party from returning a refugee ‘to the frontiers of territories where his life or freedom would be threatened’. It does not require states to offer asylum visas to facilitate lawful entry; but where a refugee does manage to get past the border guards, it does forbid state parties from penalising a refugee who has come ‘directly from a territory where their life or freedom was threatened’ then presented themselves ‘without delay to the authorities’ and is able to ‘show good cause for their illegal entry or presence’. Unlike other human rights treaties, the Refugee Convention operates by gradually attaching to refugees greater rights on their literal then metaphorical journey. Ultimately, a host state commits to facilitating the assimilation and then naturalisation of a refugee who cannot return home.

The bespoke schemes offered by the United Kingdom are welcome. They go beyond the rather minimalist commitments of the Refugee Convention. But they should not be used as an excuse for retreat from the international rights-based regime. The top five nationalities claiming asylum in the United Kingdom last year were Iranians, Iraqis, Eritreans, Albanians and Syrians. A full 72 per cent of Home Office asylum decisions were grants of asylum, and that was before any appeals. Refugees arriving by unauthorised means are no less deserving of compassion or protection than others.

Colin Yeo is a practising barrister at Garden Court Chambers with over 20 years of experience in immigration and asylum law.

This article was highlighted in the Asylum Matters advocacy update on 27 April 2022. 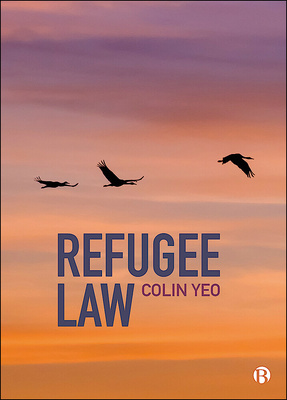 Refugee Law by Colin Yeo is available on the Bristol University Press website. Order here for £28.99.