Social scientists aren’t always very good at remembering their own history. Also, their research doesn’t build as intelligently on what has gone before, as research in some other disciplines. This means that texts which were trail-blazing and influential at the time, and which are still relevant today, can be forgotten unless active attempts are made to ensure that they remain an accessible part of social scientific knowledge.

This month sees Policy Press publishing reissued editions of classic texts by myself and my father Richard Titmuss. The five books cover very different subject areas – meanings of the welfare state, altruism in blood donation, the experiences of first-time motherhood, social support to improve maternity care, women’s labour in the home – yet each in its way was a game-changer in social science and policy theory and/or methodology. They are texts which introduced new angles of vision on issues that had not previously been subject to creative interrogation by social scientists.

Richard Titmuss, widely regarded as the prime founder of social policy as an academic discipline, published his Essays on ‘The Welfare State’ in 1958. The term hadn’t long been in general use to describe state-sponsored social service provision aimed at lowering inequality, and Titmuss put it in inverted commas, perhaps to indicate his dissatisfaction with the vague way in which the term tended to be used and the misleading assumption that state welfare provision had now risen as far as it would go. His Essays remain remarkable as reflections on the interplay between state welfare provision, on the one hand, and the continual unravelling of social and economic change, on the other.

The other Titmuss text in this Reissues series explores a topic that would have belonged in the sociology of health and illness had this subdiscipline been more fully developed at the time. The Gift Relationship appeared in 1970: it was his last book, and in many ways his most influential, particularly in the USA, where it was said to have pushed the government into better regulation of the market in blood. This market, and especially its ethics, was the focus of Titmuss’s interest, and what he has to say about how a ‘free’ market in blood operates (badly) compared with a voluntary blood donation system such as the one we still have in the UK remains a reference point for many debates about the ethics and health effects of market capitalism.

My texts come later in the evolution of social theory and methodology. The Sociology of Housework was originally published in 1974, From Here to Maternity in 1979 and Social Support and Motherhood in 1992. The first two are part of the infusion of feminism into academic sociology which came with the arrival of the women’s liberation movement in Europe and the USA in the late 1960s and early 1970s. The consequent questioning of gender provoked a flood of research, theorizing and writing about why and how the social sciences had grown up around the embedded bias of looking at the social world mainly from the vantage point of men. The Sociology of Housework was one of the first attempts to conduct research on the hidden subject of women’s unpaid work in the home. In adopting a similar approach to that used in the study of employment work in factories and offices, it instituted a new kind of enquiry into the meanings of labour, and into the traps of the deeply conventional division between the public and the private. Its methodology – talking to women directly about housework – was repeated in From Here to Maternity, which followed a sample of women from early pregnancy through to the first months of motherhood. Both projects helped to fuel a substantial change of direction in social research methods towards more qualitative approaches. The exploration of themes in the transition to motherhood around the impact of intrusive, patronizing and poorly-evidenced medical interventions had an impact beyond the academic world in helping to change maternity care practice. Many of the accounts in From Here to Maternity still resonate among new mothers today.

The last of these Reissues, Social Support and Motherhood, dates from 1992, and is subtitled ‘The natural history of a research project’. That’s what it is – a detailed narrative about the attempt to combine the apparently divergent methodological approaches of qualitative interviewing and a randomized controlled experiment in examining how supportive care might be able to influence the experiences of mothers and babies. The research helped to show others a way forward in establishing whether social interventions work or not, at the same time as respecting the ethical principle of beginning and ending with people’s own accounts of their experiences. The book stands the test of time in challenging the ‘hygienic’ model of social research in which difficulties and contradictions are made to disappear, rather than yielding lessons from which we can all learn how to do research better. 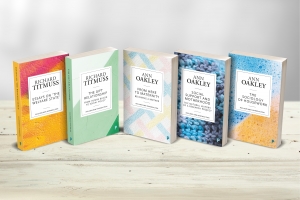 The Oakley/Titmuss reissues are all now available in paperback on the Policy Press website. Order for £21.59. Browse the full collection