Coronavirus UK: inequalities, social solidarity, and what would Richard Titmuss have thought?

When I began researching the life of Richard Titmuss, first Professor of Social Administration at the London School of Economics (LSE), I could not have imagined that my book, Richard Titmuss: A Commitment to Welfare, would be published during a global pandemic. This has prompted me to speculate on what Titmuss might have made of the crises currently confronting the United Kingdom.

First, though, who was Richard Titmuss? Following his appointment to the LSE in 1950, Titmuss, at first almost single-handedly, set about creating the academic field we nowadays call Social Policy. He built up a powerful and influential Department, which came to include other prominent social scientists such as Brian Abel-Smith and Peter Townsend. Titmuss’s activities outside of the School included acting as an advisor to the Labour Party, both in opposition and in government, and membership of a wide range of official and unofficial bodies, for example the Royal Commission on Medical Education.

Although sceptical about the phrase ‘welfare state’, Titmuss was, nonetheless, a committed advocate of publicly-provided social services. These, if properly formulated, adequately funded, and humanely applied, could, he believed, reduce social inequalities, and foster social solidarity and the individual exercise of altruism. For Titmuss altruism was an innate human characteristic but one that was often stifled by existing political and socio-economic systems. Of the welfare measures enacted in post-war Britain, Titmuss was especially supportive of the National Health Service (NHS), whose creation he described as ‘one of the most unsordid and civilised actions in the history of health and welfare policy’.

Social solidarity, meanwhile, was, as Titmuss explained in his monumental volume on Britain’s ‘Home Front’ during the Second World War, what characterised the country’s behaviour during the conflict, and had been a key factor in pushing forward post-war social reconstruction. Unfortunately, he subsequently argued, wartime social solidarity had given way to the materialism of the ‘Affluent Society’ of the late 1950s and 1960s. The growth of affluence, furthermore, actually concealed an associated growth in inequality, which Titmuss, by the mid-1960s, saw as an even greater problem than straightforward poverty.

Since the beginning of the present crisis, there have been many ill-advised analogies made concerning the ‘war’ with coronavirus which invoke the ‘spirit’ of Britain during the 1940s. Nonetheless, Titmuss would almost certainly have seen the displays of social solidarity among the general population, and the altruism of those working selflessly for the benefit of others, as a vindication of his view of human nature. Evidence for this would include the creation of mutual support groups, broad compliance with the ‘lockdown’, and the tireless work of often underpaid health, care, and other ‘frontline’ workers. As such, these forms of behaviour, Titmuss would have continued, are implicit rejections of the unbridled pursuit of self-interest, and the claims of the market economy.

In a striking passage from his book published shortly before his death in 1973, Titmuss wrote that those donating blood voluntarily were ‘taking part in the creation of a greater good transcending the good of self-love’. In order to ‘love’ themselves, donors had recognized the need to ‘love’ strangers. All this was the antithesis of ‘atomistic private market systems’, one of whose functions was to undermine, irrespective of the consequences, the sense of social obligation individuals felt to one another. It is intriguing to see current actions such as shopping for an elderly neighbour, perhaps previously unknown, in this sort of light.

Unfortunately, of course, there is another side to current events. Even before his appointment at LSE Titmuss was researching and publishing on, notably, population health. In the 1930s he began to produce analyses showing that mortality and morbidity varied by social class, and by region. So, for example, infant mortality rates were much worse in areas heavily affected by unemployment, such as South Wales, than in parts of the country relatively untouched by unemployment, and where incomes were higher, such as London and the South East. This was both unjust and a waste of human potential but, Titmuss argued, hidden in official statistics. In the 1940s he expanded his research to include the impact of long-term chronic disease on individuals and their families. He did so in conjunction with his close friend, and later professor of epidemiology at the London School of Hygiene and Tropical Medicine, Jerry Morris. Essentially, what they argued was that health experiences and outcomes were very strongly influenced by factors such as social class and occupation.

Titmuss, and colleagues such as Morris, would therefore be depressed, but unsurprised, by the impact of coronavirus on different income groups, occupations, and ethnicities. In so doing, the virus has shown in stark detail the inequalities in British society to which Titmuss alerted us many years ago, but which remain in place – indeed, some have worsened. What he would also have argued was that these inequalities are not ‘natural’ or unchangeable. Rather, they were, and remain, the consequences of specific political and social decisions and policies.

As to where responsibility lay for this situation, Titmuss, in a (very enjoyable) rant in the late 1950s against what he called The Irresponsible Society, lamented that in his youth he had envisaged a more democratic society which took its social responsibilities seriously. What he had not realised was that ‘government by the people could mean that power in government, the Cabinet and the City, could lie almost permanently in the hands of those educated at Eton and other public schools’.

Like any other social scientist, Richard Titmuss was sometimes wrong in his analyses. But his insights into issues such as population health and inequality, his lifelong scepticism about official statistics, and his promotion of social solidarity and individual altruism, surely have something to teach us today when examining our society’s response to Coronavirus and its dreadful effects.

John Stewart is Emeritus Professor of the History of Health and Healthcare at Glasgow Caledonian University. He has published extensively on welfare history. In 2015 he was commissioned by what is now the LSE’s Department of Health Policy to write a biography of Richard Titmuss. 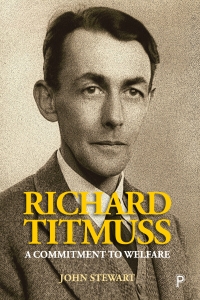 Richard Titmuss by John Stewart is available from Policy Press, imprint of Bristol University Press. Order the book here for £36.00