A world turned upside down: What next for voluntary action?

While the COVID-19 pandemic was turning everyday life upside down, one constant has been the contribution by individual volunteers and voluntary organisations to help those in need – from spontaneously formed mutual aid groups delivering food parcels on the eerily quiet streets in the early days, to teams facilitating the biggest vaccine rollout in history. As we argue in our new book, Transformational Moments for Social Welfare: What Role for Voluntary Action?, now more than ever, voluntary action remains part of ‘who we are’ and ‘what we do’.

In March 2020, the declaration of a national emergency was of a magnitude not seen since the Second World War. UK Prime Minister Boris Johnson repeatedly spoke in military metaphors and along with many other commentators, he drew parallels with the 1940s. But Johnson did not specifically refer to the crucial role played by voluntary organisations during the war and in post-war recovery.

When the pandemic hit, we were nearing the end of an ESRC-funded study examining debates on social welfare that took place during the 1940s and 2010s. We argued that the 2010s witnessed the most significant renegotiation of social welfare provision in England since the consolidation of the welfare state in the 1940s. Informally, we referred to these decades as the bookends of the welfare state, comparing the establishment of a comprehensive social democratic welfare state with the significant retrenchment and restructuring underway in the 2010s.

The 2010s were shaped by a politics of austerity that sought to restrict welfare benefits and strengthen sanctions in the social security system, far-reaching changes that some consider amounted to the ‘dismantling’ of the welfare state. Such developments had profound implications for individual citizens, as well as consequences for voluntary action. Was this the end of the welfare state? And what role would voluntary action be expected and willing to play beyond this? We opted eventually for a more open-ended description, of transformational moments, conceptualising the 2010s as a yet unresolved process of rethinking the welfare state.

What does this mean for voluntary action? The early months of the pandemic were marked by rapidly improvised new relationships between voluntary action and the state at local and national levels, which at first seemed to herald a new partnership of necessity, reminiscent of but substantially different to the mobilisation of voluntary action at the start of the Second World War. However, as the pandemic continued, and the financial impact on the charity sector became more apparent, this partnership began to falter, at national level at least.

Unlike the 1940s, when the voluntary movement’s wartime response built on good relations with government forged during the Depression, the onset of the pandemic came at the end of a decade of ambivalence – and at times outright hostility – towards voluntary organisations from successive Coalition and Conservative governments in the UK. While support for a so-called ‘Big Society’ and plans to open public services appeared to offer the potential to expand the role of voluntary action in welfare provision, the picture was more complex. A decade of austerity and fiscal constraints saw swingeing cuts to voluntary organisations, the dismantling of partnership programmes and attempts to silence the advocacy role of voluntary organisations; the 2010s were marked by what we call antagonistic collaboration.

As the pandemic continued and as voluntary organisations faced increasingly difficult pressures of rising demand, operational challenges that required rapid changes to service delivery models, and declining resources, tensions began to show. The voluntary sector came together to campaign for greater government and public support, arguing that it was #NeverMoreNeeded. The voluntary sector’s role as a fundamental part of who we are and what we do to meet needs in the face of adversity began to feel more pertinent than ever.

Our book, then, becomes a way to help inform ongoing and future debates about the role, position and contribution of voluntary action in social welfare. If COVID-19 has taught us anything, it is that newly exposed human vulnerabilities and exacerbated social inequalities demand an intense and soul-searching deliberation on the way we seek to address needs and rebuild a genuinely social security.

We end by reminding readers of a House of Lords debate from April 2020 when Baroness Jill Pitkeathley eloquently said that ‘charities are the eyes, ears and conscience of society: they mobilise, they provide, they inspire, they advocate and they unite’. What role should they play in our future?

As part of this conversation, we would like to encourage readers to contribute to two calls for evidence. A sector collaboration, including the National Council for Voluntary Organisations (NCVO), is bringing together people and organisations across England to help shape their Vision for Volunteering as we plan for the next decade. Second, we encourage readers to contribute to the government’s National Resilience Strategy: Call for Evidence. Is there sufficient recognition of the role of voluntary action?

Georgina Brewis is Associate Professor in the History of Education at University College London.

Angela Ellis Paine is Research Fellow at the Third Sector Research Centre at the University of Birmingham.

Irene Hardill is Professor of Public Policy at Northumbria University.

Rose Lindsey is Senior Research Fellow at the University of Southampton. 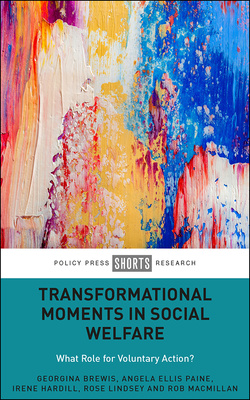