Community action in the pandemic – what happened to mutual aid?

Has the COVID-19 pandemic led to a rise in localised collective action, and new collective ways of caring for each other? These were certainly some of the claims made during the first wave of the pandemic in the UK last spring, as part of an outpouring of writing and reflection on the major and dramatic social changes that seemed to be unfolding overnight.

One theme of such analysis concerned the nature of community action: localised acts of solidarity or mutual aid which sprung up as the normal infrastructures of society crumbled in the face of the risks posed by this new airborne virus. In the UK, it is estimated that approximately 4,000 mutual aid groups existed during the first lockdown in Spring 2020, mostly concerned with supporting neighbours to access food, medication and social support, especially those deemed particularly vulnerable to the virus. As well as such networks supporting neighbours, others took part in acts of solidarity such as sewing hospital gowns, raising money for health charities or organising sociable events for neighbours such as singalongs and street aerobics sessions to combat isolation. Alongside individuals, many businesses (as well as existing voluntary sector organisations) found new ways to gift and share food and other essential provisions for those in need. Such practices led to assertions about the rise of solidarity and new ways of living together and organising society that might have far-reaching consequences.

As we head towards the end of a wearisome two years of the COVID-19 pandemic, we hear much less about such activities. So what has happened to them and what can we conclude about these original claims? In my new book, Care, Crisis and Activism: the Politics of Everyday Life, I take stock of the rise of forms of community action and activism in the contexts of the crisis both of austerity and the pandemic. There are some similarities in the dynamics of crisis involved. The initial dramatic events of the global financial crash of 2008 led to visible contractions of the reach and support offered by the welfare state. Yet ‘austerity’ has since shifted from being an overt and dramatic crisis into a more messy and entangled ongoing reality around the nature of welfare services and support.

Similarly, the pandemic may have had a dramatic beginning, but it now seems unlikely to have a definitive ‘end’. Since the initial dramatic lockdown and instructions to ‘stay home and save lives’, it is not that either work, health or welfare systems have returned to ‘normal’; rather there are now new configurations and unstable new ‘normals’, for example repeated episodes of ‘shielding’ or isolation, supported by a patchwork of formal and informal structures that may allow for forms of coping. Furthermore, the dynamics of need and vulnerability that were so immediate and apparent at the start turn out to be entangled with other more intractable needs and inequalities in society. There is therefore a less immediate and visible crisis which might fuel volunteer action, and the impacts of the pandemic have become more differentiated and complex. Also, it has become clear that the upsurge of local action during the first lockdown was partly fuelled by the furlough scheme freeing up some people’s time in new ways. For these reasons, the kind of local action seen at the start of the pandemic has clearly declined. Nonetheless there remain resources, networks and legacies of these forms of action which continue to shape current and future forms of local engagement.

In the book, I propose new approaches to understanding the politics of such local engagement. I look across these crises to assess the values and limitations of localised action that takes place in the shadows of austerity and the pandemic, and indeed other crises such as the ecological. At times these forms of action necessarily offer temporary ‘sticking plaster’-type solutions, but, I argue they also do sometimes illuminate new ways to be together and to act and provision collectively, particularly around communal caring. In the book I consider together what might be seen as ‘activism’ (for example anti-austerity protests) with what might be seen as ‘volunteering’ (such as supporting isolated neighbours), arguing that both rely on orientations towards collective care. One striking feature of emergent local activism is the coming together of digital and face-to-face practices and spaces, including the centrality of different social media platforms to both coordinate and represent or amplify local action. This has a number of impacts. One is the ways that online media produces and circulates affective and emotional responses, which can spur citizens to action, for example when hearing about particular cases of need in their communities. This was the case in relation to the organisation of ‘mutual aid’ for example. Another outcome of the centrality of digital spaces is that such platforms allow for different kinds of organising practices, bypassing many of the traditional structures and bureaucracy of community action and projects. This might involve organising practices themselves going ‘viral’ and being copied across localities. For example, restaurants or food producers with surplus food can find ways to get it directly to those in need without having to apply for funding and set up complex structures to assess need. Some of the approaches of activism and direct action are now therefore being used within the sphere of volunteering and welfare-orientated community activism. While now less visible and widespread than in the early lockdown, it seems likely that such forms and approaches will continue to evolve, potentially drawing together people in experimental new ‘stranger intimacies’ and forms of gifting and sharing, which might challenge, or provide alternatives to wider economic and political systems.

However, as the rather short-lived nature of many such projects during the pandemic attests, these new configurations are inherently unstable and fragile. Relying as they do on forms of care, often provided by those situated in the same localities and realities, these projects are vulnerable both to shifting circumstances, emotions and atmospheres, and also personal forms of burnout and exhaustion. The emotional and mental health burden of such action was spoken about by many of my interviewees across projects responding to austerity and the pandemic. These localised initiatives cannot and should not replace wider systems of care and support in society, including crucially the welfare state. Rather, as I argue in the book, there is a need for localised ‘infrastructures of care’ involving the state, that leave room for such community action and solidarity, but also underpin and support it.

Eleanor Jupp is Senior Lecturer in Social Policy at the University of Kent. 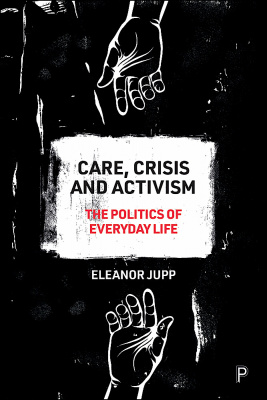 Care, Crisis and Activism: The Politics of Everyday Life by Eleanor Jupp is available on the Policy Press website. Order here for £63.99.