After a year characterised by political uncertainty, one thing that seems clear during this election campaign is that the two largest parties have their work cut out to build enough support to achieve a clear majority. British politics is experiencing an unprecedented level of fragmentation. Traditional divides along the lines of class are blurring, as others like location, age, and education, come sharply into focus.

The challenge for all parties is to go beyond Brexit, as important as it is. Whilst Brexit has dominated the political debate, out in the country people are concerned about a whole host of issues.

This recent report written by Frank Soodeen and I for the Joseph Rowntree Foundation (JRF) argued that low-income voters are a new electoral battleground for the parties.

Low-income voters are ‘up for grabs’ like never before. Turnout amongst this group rose by 7% in 2017, the first notable increase in 30 years. Both Labour and the Conservatives saw support from this group increase as a result. People on the lowest incomes are now the most likely to change how they vote. Between 2010 and 2017, more than half of voters on a low income either changed whether they voted or not between elections or changed which party they supported.

Similarly, the nature of the people and the groups on low incomes and how they see themselves is changing. As I showed in my book The New Working Class, class is not less relevant, but is different to the traditional working class that went before it. Today’s working class is multi-ethnic and diverse, made up of people living on low to middle incomes, employed as cleaners, shop workers, bar tenders, teaching assistants, cooks, carers and so on.

Despite significant social and economic progress in the past 40 years, it turns out that we didn’t all become middle class. In fact, as wages and living standards continue to be constrained, it is entirely possible that this new working class will become yet more sizeable.

Clearly, there is an advantage to be gained from pitching to this group and seeking to deliver on the issues that are a priority for them. The cost of living is top of their list, and Brexit only just makes it into their top five issues. Not only could this pay dividends at the ballot box – it is also the right thing to do. People living on a low income deserve to have their voices heard, their experiences recognised and their concerns addressed.

14 million people are locked in poverty across the UK, including nearly one in three children, with child poverty rising in recent years despite commitments to address it. This is unacceptable. In a society that believes in compassion and justice, politicians must act to free people from poverty.

It is critical to address people’s concerns about a lack of opportunity and prosperity in their local communities. The next government has an unparalleled opportunity to be ambitious in the size and scope of its investment in regional and local growth, helping towns prosper across the UK. JRF recommends boosting local economies where employment and earnings are low through large-scale, long-term investment in skills and infrastructure.

Politicians must also ensure social security provides a stronger anchor in turbulent times. Social security should be a public service we can all rely on, but in recent times our system has not been effective in supporting people out of poverty. To change this, politicians must deliver on the commitment to end the benefit freeze, end the five-week wait for Universal Credit, and boost support for families and those with disabilities.

Housing is a critical issue for voters on a low income. The next government must unlock affordable homes for people on low incomes. This can be achieved by building 90,000 homes a year for social rent and re-linking housing support with rents, to ease the pressure on people struggling to afford the private rented sector.

These policy approaches have traction with low-income voters as well as the wider public. They also offer our next government the opportunity to improve the lives of a substantial portion of our society, and to show that it cares about their concerns and well-being. In doing so, it could restore some trust in our political system among low-income voters.

With a higher turnout and more people switching votes, parties need a strong and clear strategy to secure the votes of people on low incomes. 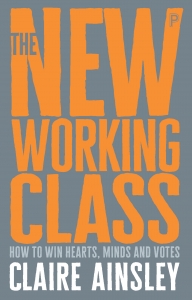 The New Working Class by Claire Ainsley is available on the Bristol University Press website. Order here for £11.19.