Why current climate change policies are necessary but insufficient

Sometimes in conducting research there is one moment, an Archimedes Eureka moment, when a single piece of evidence cuts through the confusion of competing theories, multiple concepts and lively argument. This happened to us when we decided to examine the evidence for climate change that is used to inform international debating and decision-making.

The main loci for this debate and decision-making are regular UN ‘COP’ (from ‘Conference of the Parties’ to the 1992 UN Framework Convention on Climate Change) meetings – the upcoming Glasgow conference is COP26 (i.e. the 26th such meeting). There cannot have been an international policy area better serviced by a global science research programme: the Intergovernmental Panel on Climate Change (IPPC) consists of myriad leading environmental scientists from across the world, collecting climate data, developing climate models and providing climate forecasts with clear consequences. This appears to be a textbook case of an evidence-based decision making process. Thus when the COP conferences only generate very weak, lowest common denominator, policy solutions it must be down to the inadequate cohort of politicians. Hence the exasperation of David Attenborough, Greta Thunberg and their ilk: why can’t they just get on and do what is needed?

The evidence is there, so what is the problem? The problem is the evidence – not its scientific veracity as sceptics would claim, but its very constitution. The nature of anthropogenic climate change is in its name. There is the ‘climate bit’ that is commonly viewed as ‘The Science’ and the ‘anthropo bit’, and it is their interactions that cause the change.

This interaction is between two complex global assemblages, one environmental the other social. In the work of the IPCC it is the former that is carefully measured and modelled, leaving the latter un-theorised and therefore relatively unexamined. It is not that there is no social science understanding of the social complex – the literature on contemporary globalization is huge – but it is not included. Let’s start with an elementary notion of a global economy. Like any economy it operates, however imperfectly, through the interplay of supply and demand, or put another way, consumption satisfied by production. And here comes our Eureka moment…

Starting in 1990 the IPCC has published five Assessment Reports, key ‘state of the art’ pronouncements summarizing their work. These very large tomes – literally millions of words – represent the evidential base for international climate change policy making. We examined them by searching for selected words reflecting economic supply and demand. Part of what we found is tabulated below. Very plainly, we found a gross bias towards supply-related words suggesting a very unbalanced conception of the operation of the global economy. Overall there is a dearth of translating economic considerations into how society is actually conceptualised but what is found is especially revealing: industrialisation gets hundreds of mentions, consumerism just two. It is the latter – only two, Eureka! – which encapsulates our finding: ‘The Science” recognizes the operation of economic supply but economic demand appears rather off limits. It is this mindset that makes the evidence base of climate change policy problematic.

There has been no direct pressure on scientists to prefer the economic supply side but it can be seen as a consequence of the way their scientific work is organized.  As a UN institution, IPCC scientists are nominated by national governments and they report to policy makers who are governments. The latter want solutions that do not impinge on their popularity and in this respect demand-side initiatives are politically dangerous. Try selling less consumption to your supporters. Hence the mix of continued economic growth and focus on cutting carbon. Do not ask why our way of life creates production of carbon, just keep consumption going. Technology will save the day with its dual role of reducing carbon and increasing consumption. For the moment it appears a win-win situation. But, of course, it is no such thing.

The role of supply is to satisfy demand and that is a direct function of urbanisation. City dwellers have always consumed more than their rural counterparts and in the modern consumer city this has gone into overdrive. We live in a world of thousands of large cities, each specific one a centre of more and more consumption. It is these multiple urban ways of life that constitute the global social complex that is interacting with the global environmental complex to create today’s climate emergency. This is far, far away from politicians arguing in COP meetings.

We have to begin thinking about reinventing the nature of our cities, a bottom-up process of changing people’s behaviour. Rather than cities (urban demand) acting as destroyers of nature, they have to be central to the solution and be understood as part of nature. Jane Jacobs calls it the search for dynamic stability.

This is not a call for resilient cities or sustainable cities; although creating them is necessary, they can imply being resilient in the face of more consumption, or sustaining society to enable more consumption. Our call is to develop cities for stewardship of nature, posterity cities for future generations. 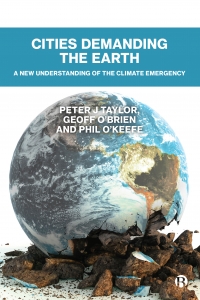 Cities Demanding the Earth by Peter Taylor, Geoff O’Brien and Phil O’Keefe is available on the Policy Press website. Order here for £21.59.