Coronavirus: an opportunity to reassess the social contract

It already seems clear that coronavirus is going to have a lasting impact on contemporary societies, including many aspects of our individual and collective lives.  It also appears likely that there will not only be significant short- and medium-term consequences but that the longstanding trajectories of most (if not all) countries and global politics and economics are more uncertain now than they have been for a long time.

How we as societies respond to the challenges and opportunities arising from this global crisis could lead to fundamental changes in the social contracts across these societies, for either better or worse. There is an opportunity to reassess the kind of deal we have with the state and other interests and influences in governance systems (including the market, trade unions, professions, the independent sector etc.) and to question the legitimacy of the implicit contract that binds us together.

Through my research for my forthcoming book Social Policy, Political Economy and the Social Contract, due to be published by Policy Press next year, I have been developing an approach to social contract theory that employs Rousseau’s work (and those influenced by him) as a general framing. In general, my conclusions have not been positive, either about the nature of the social contract or about the scope to redefine it. However, the emerging crisis provides an opportunity to do things differently.

Rousseau’s work is instructive here and can be used to better understand issues of distributional justice and to provide a route forward in resolving these. In particular, the notion of a social contract (through reconciling and simplifying what I consider Rousseau got right) can be used to:

In short, the idea here is that we should all have a relatively equal stake in society because this offers the basis to strengthen social ties and provides the grounding that gives us the freedom to fulfill our potential,both individually and as a society. In other words (and of relevance to the current crisis) ‘we are all in it together’.

We also need to consider the epistemological and ontological position adopted here because these are critical to how we both understand the implications of the crisis and (following the framing of Rousseau’s approach above) use this understanding to pursue greater equality and strengthen human ties. Bhaskar’s (1975) critical realism and Reed and Harvey’s (1992) development of this into complex realism feed into David Byrne’s (2005: 94) work on complexity theory, that views reality as, ‘composed of complex open systems with emergent properties and transformational potential’.

Taken together, these approaches understand the world as hierarchically layered, in which reality is stratified between, for example, the micro, meso and macro. The world can be conceptualised as a system of systems. How these systems are defined and bounded is open to debate (and is a key issue to be pursued via praxis). What is important here is that they are connected, overlap and have considerable interdependencies. Furthermore, Castellani argues that ‘agents in social systems are learning animals and therefore interact with and respond to changes in the system, including policy interventions. At the aggregate level, these responses and their intersecting interactions self-organise into a larger emergent pattern that forms a whole that is more than the sum of its parts’. The current crisis, and consideration of the likely aftermath, illustrate this argument nicely.

Health and the coronavirus

Ferguson et al predicted that an unmitigated response to coronavirus could lead to 81% of the UK population being infected and approximately 510,000 people dying (which is about the average number of annual deaths in the UK).  As Castellani points out, computational modelling of this type is best viewed not as a prediction but a heuristic device to help us make decisions. What is clear now is that the existence, spread and modelling of coronavirus have all captured the attention of politicians, policy makers, the public, professionals, practitioners, business, and the independent sector, and already influenced these in fairly profound ways.

With fears about exponential growth in the spread of the virus, the current focus has moved from mitigation to seeking to suppress the growth of the virus, as the Prime Minister announced a national emergency and lockdown on 23rd March. For the next three weeks, at least, all but key workers must stay at home apart from essential food shopping, travelling for essential medical needs and having one form of exercise a day (walking, running or cycling). However, there were/are valid reasons for delaying and even not taking this approach, including how we view risk, what we consider to be priorities across the system and ideological positions on concepts such as inequality and freedom. For example, a family with four children living in a two bedroom flat will experience the lockdown radically differently from a similar sized family in a detached house with a large garden. As the crisis develops will the population’s differential stakes in society begin to have an affect over the incentive and/or inclination to follow rules? In this respect there is an implicit assumption that the demand to follow universal rules has the same effect on everyone, when, in practice, those with the least are likely to make a bigger sacrifice in terms of day-to-day quality of life for the greater good.

In his recent blogs Castellani describes coronavirus as both a nexus issue and wicked problem, ‘because the configuration of factors is far too challenging and intersects with too many different domains of our lives, to effectively solve once and for all’. What also strikes me as significant is that the virus has (somewhat inevitably) massively enhanced the influence of NHS policy across the nexus cutting across place (at different scales) and economic, political, social, institutional, infrastructural systems. The key driver being to protect the NHS and save lives by preventing the spread of the virus beyond levels that hospitals can manage. Here we have an example of the limited spare capacity (or ‘redundancy’ in engineering terms) that is a feature of the political economy, in which the notion of economic efficiency as a private sector or market-based logic, has been extended to the public sphere. The fact that the NHS has been much more protected and better resourced than other parts of the public sector over the last 10 years of austerity is extremely telling and concerning from the point of view of knock-ons across the nexus.

It is also important to consider how health is being conceptualised at this point in time. Understandably, given the widespread concern about the virus, it has been framed around the absence of disease and illness. In ‘normal’ times this is considered by many to be a necessary but not sufficient condition of health (whether at an individual, local, regional, national or global level). In fact, there is much criticism of this framing as a narrow and negative definition of health (the absence of a condition being key here) with most approaches also stressing the importance of physical, mental and social wellbeing. The implication of the latter framing is that (much like in Rousseau’s work) it emphasises the significance of the environment in which people live for their health outcomes and the importance of policy and political economy in making the environment conducive to healthy outcomes for all – some degree of equality of condition is important for equality of opportunity to lead a healthy life. For now, though, we are seeing the nexus or system of systems being dominated by health interpreted as the absence of disease and illness. In so doing, we (in the UK) and many other societies are essentially pressing the ‘pause button’ on a wide variety of social and economic practices and routines. One hope is that (unlike with my 25-year-old CD player!) when we hit play again life will resume and go back to normal. This will require massive investment and support from the state (and hopefully business and financial markets) as well as civil society. But, and apologies for extending the metaphor, we might want to consider changing the CD, or even getting the old tape deck out and/or rediscovering vinyl. This means thinking differently about the role and nature of the political economy and how it can create the conditions for full and healthy lives across all of society, rather than treating us as competitive-individuals in highly unequal societies – in other words competing but from a highly uneven playing field.

The financial crash of 2008 and subsequent recession was the last systemic crisis of anything approaching the magnitude of the likely result of coronavirus and provides an instructive example of what not to do. Much of the financial and banking systems failed but many institutions were deemed too big to fail and supported to get back on their feet through massive public investment, whilst austerity measures were rolled out across society impacting both the nature and extent of social policy provision. The recent report on Health equity in England: The Marmot Review 10 years on, provides a very good summary about the consequences of austerity for social policy and ultimately for inequalities in health outcomes:

Austerity has taken its toll in all the domains set out in the Marmot Review. From rising child poverty and the closure of children’s centres, to declines in education funding, an increase in precarious work and zero hours contracts, to a housing affordability crisis and a rise in homelessness, to people with insufficient money to lead a healthy life and resorting to foodbanks in large numbers, to ignored communities with poor conditions and little reason for hope.

These are some of the conditions in which the current crisis falls. It seems incredibly timely to take stock of the widely differential positions that people find themselves in, in society and to question whether this is mutually beneficial. There are many opportunities that could arise from this shock to the system in terms of fundamentally changing the way things are done. Rebalancing the economy to work in the interests of society rather than the markets will be an important systemic move in the right direction to strengthen human ties across social systems and free us up to achieve our potential. 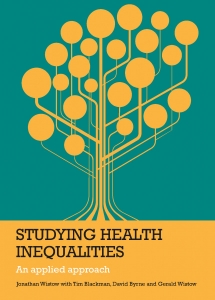 Jonathan Wistow is the author of the forthcoming Social Policy, Political Economy and the Social Contract, publishing in June 2021 and, Studying Health Inequalities: An Applied Approach with David Byrne, Tim Blackman and Gerald Wistow, which is available on the Policy Press website. Order here for £21.59.