by Amanda Grenier Chris Phillipson and Rick Settersten
11th May 2020

The development of ageing populations has opened up major new issues for social scientists to address, yet we are still only identifying, let alone understanding, the full impact of the changes involved. Much is made of growing old as a health and welfare issue – not least in the midst of COVID-19 as it creates insecurity and risk that will have a legacy for decades – but we must also examine inequality, ageism, changes to the life course, and the growing diversity of ageing populations.

These are some of the themes addressed in our new book Precarity and Ageing: Understanding Risk and Insecurity in Later Life. We set out to explore some of the challenges facing older people, given a context of rising life expectancy, cuts to the welfare state and widening economic and social inequalities. Although cultural representations and policy debates depict older people as a group healthier and more prosperous than ever, many older people experience ageing amid insecurities that emerge in later life or reflect previous disadvantage.

The idea of precarity offers scope for gaining new insights into the way growing old is experienced. Through the influence of Guy Standing, much of the work on precarity has focused on labour-related issues. These are certainly important to older people, with those 50 and over a key group amongst those affected by the rise of zero-hours contracts, temporary work and self-employment. Employment difficulties encountered in mid-life can translate into conditions for a precarious late life, through reduced social protection, housing insecurity, or limited pensions – problems affecting women and migrant groups in particular.

The precarious conditions relating to ageing and later life are well-illustrated through the expansion of unmet care needs. Since the 1980s, public programmes have been dismantled across Europe and North America, driven by neoliberal priorities of increased private and for-profit care. Often, older people become trapped in what have been called ‘no care zones,’ spaces where support may be unavailable or inaccessible. Such situations highlight situations of acute vulnerability which may affect people in later life. But they are a reminder as well that these are invariably socially created, reflecting political decisions about the resourcing of care and support within the community.

Precarity may also be experienced in different ways at different ages. A life course perspective teaches us that precarity experienced earlier in life can be carried forward and that the precarity of one person can transfer to others. The precarity of the later years often stems from sources outside of the individual that cannot be easily anticipated or controlled – for example, big shifts in housing and labour markets, in the structure and composition of populations, and in migration, education, employment, retirement, health care, and family policies.

The later years are certainly embodied with much potential. But that promise can quickly come undone in the face of setbacks in health, wealth, and relationships – and the ability to recover may be more difficult and the time to do so much less. Major historical events leave their mark too. At this very moment, the COVID-19 pandemic is altering the very terms of life and death, and the experience of every life transition in between. Life in extreme old age is fragile; none more so than in a period of crisis such as the present.

Ageing allows us to see different areas of social life as contributing to manifestations of precariousness – and go further. Studying ageing tells about distinctive forms of precarity; however, we also learn about new skills and relationships that may be formed in response. Personal attributes and capacities, accumulated over the life course, become key ingredients for managing precarity. New social and economic organisations are being created by older people, who are leading the way to developing responses to living in a precarious world – reconstructing personal relationships as well as the networks and organisations to which they relate.

Society is now faced with a different type of ageing, reflected in a changing cultural, social and economic environment. The purpose of our work – together with the contributors to the book – is to examine the new risks and insecurities facing older people but also the potential for new forms of solidarity that need to be built within the context of ageing societies. Social scientists have been slow to respond to the structural changes facing older people following the dismantling of the institutions that defined social ageing in the 20th century.

The evidence suggests a future, we would argue, of a more divided old age, with prosperity for some matched by deep poverty for others. Acknowledging ‘precarity’ and ‘precariousness’ is an initial response to this changed environment, one requiring new theories and policies to be developed within the field both of gerontology and the social sciences more generally. Our hope is that the book sparks discussion, debate, and the advancement of critical perspectives that alter the conditions of ageing and late life, at present and into the future. 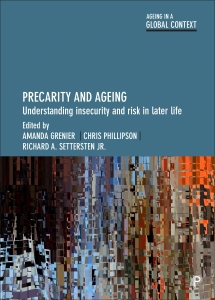 Precarity and Ageing: Understanding Insecurity and Risk in Later Life edited by Amanda Grenier, Chris Phillipson and Richard A. Settersten Jr is available on the Policy Press website. Order here for £60.00, or get the EPUB for £19.99.

by Amanda Grenier Chris Phillipson and Rick Settersten
11th May 2020