We need to talk about the failure to recognise population ageing alongside other global challenges including climate change, urbanisation, patterns of migration, technological development and the COVID-19 pandemic. The interaction between these major changes and how national trends and local initiatives support lives of quality, health and wellbeing in later life are too often ignored.

In 2018, for the first time ever, people 65 years and over outnumbered children under five worldwide. UN World Population Ageing reports show that by 2050, one in six people will be 65 years or over, with 426 million people over 80. While Northern Africa, Western Asia and sub-Saharan Africa’s younger populations are ageing rapidly, Japan is currently the ‘oldest’ country in the world, with over 33 per cent of its population 60 and over in 2017, estimated to rise to more than 42 per cent by 2050. Other European countries are also ‘older’ nations, with the UK just outside the top ten. However, by 2050, Korea and China will sit beside Japan as having 40 per cent of its population aged 60 plus, together with Spain, Italy, Singapore and Poland.

During January 2022, BBC broadcaster Amol Rajan and guests in Radio 4’s Rethink Population discussed global demography through variation between younger and older nations, and considered the impact of changing life expectancy, fertility rates, living arrangements, levels of active ageing and the financial implications of the balance between the generations. These trends have important implications for population replacement, intergenerational interaction, workforce maintenance and the need for late-life working, pension delays, immigration and continued inequalities already faced by first-, second- and third-generation migrants, and the need to encourage healthy ageing alongside care for those with chronic health conditions at the end of life.

These are issues that I raise in my book The Environments of Ageing: Space, Place and Materiality where the concept of ageing in place is central for older people living in rural and urban communities in mainstream or age-segregated environments in the UK which many call home. By capturing the voices of older people who gave their time to research, we bring together local everyday lives within wider national and global contexts. This is essential. Attachments are formed and challenges faced in dynamic ecological, social and economic environments. The contemporary global challenges see the collective experience of the COVID-19 health pandemic move to centre stage, while other issues have moved to the wings. However, we are still living in an increasingly unequal world, where climate change continues unabated; there is growing intolerance of refugees and migrants; in the UK, EU withdrawal challenges identities as citizens of supranational collaborations; and technological change continues with benefits for some more than others.

Two examples demonstrate these global-to-local interactions within the UK. Firstly, the WHO Coronavirus (COVID-19) Dashboard reporting for 14 February shows 404,910,528 cumulative cases and 5,783,776 deaths across the world, and national data indicates that the COVID-19 pandemic is affecting people of increasing age more severely than younger people. In the UK, variants of the virus are seen by Public Health England to have greater impact on those disadvantaged through ethnicity, disability and socioeconomic status combined with age, gender and location, and national data shows there have been more deaths in females aged 85 years and over than males, reflecting population demography.

Death by place of occurrence shows that beyond hospitals, care homes form the second highest place of mortality as Burton and colleagues report in Lancet Health Longevity and the Office for National Statistics indicate in weekly registered deaths for England and Wales. In providing a national strategy in England, government needs greater understanding of the roles and requirements of older people and their families living in different accommodation and care settings. Visiting care homes initially proved difficult for many relatives and friends, and remains problematic for some, with social distancing during the early months of the pandemic leading to social isolation and affective misunderstandings, especially for people living with dementia. The position of visitor/resident relationships has changed over time, raising complex human rights issues. The UK has had an advantage of access to a variety of rapidly developed vaccines, and media reports that two-thirds of people 12 years and over have received two vaccinations and a booster, gradually giving greater freedom of movement. Nevertheless, responsibility for ways of living is gradually becoming a personal decision. During the pandemic, people have been able to keep in touch with family and friends by communicating through the internet and other forms of social media. For many older people, this has been a learning curve where family members have often become responsible for informing, acquiring and teaching the use of cell phones and tablets; others have not been so fortunate and the incidence of social isolation and loneliness remains an issue.

The main global challenge is the impact of climate change, a central concern affecting environments of ageing. The Lancet Countdown Report for 2019 concerning health and climate change not only focuses on the future for the younger population but also looks at life-course issues. It reports that environmental change will continue to lead to food poverty through changing crop yields due to droughts and floods; there will be continuing impact between increasing temperature and urbanisation; heatwaves and continuing fires will continue; older people with comorbidities such as cardiovascular diseases, diabetes and chronic respiratory diseases will continue to be vulnerable to heat-related stress and premature mortality; and floods may cause immediate physical injuries, the loss of homes, infrastructure and livelihoods, with impact on wellbeing and mental health problems.

These are just two issues where physical, social, material, economic and political environments interweave, showing how the experience of ageing in place is not only local but is relational and has to be recognised as a national, regional and global issue. Population ageing in these circumstances is a challenge in itself that has to be put on the table.

Sheila Peace is Emeritus Professor of Social Gerontology in the Faculty of Wellbeing, Education and Language Studies at The Open University. 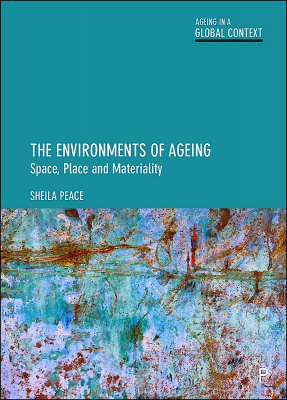 The Environments of Ageing: Space, Place and Materiality by Sheila Peace is available to order on the Policy Press website here.