Is Johnson’s government bailing out from responsibility?

When COVID-19 hit the UK, the government first ignored it, then adopted a strategy of building ‘herd immunity’. It chose not to introduce physical distancing measures or to forbid large gatherings of people at sports or other events.

The strategy aimed to quell the virus through low-level restrictions, allowing normal life to continue while some people got mildly ill. It was at odds with most medical advice and with much of the world; other countries closed schools, bars, restaurants, banned crowds and eventually locked-down households.

Of course, the government soon changed strategies as the infection rate skyrocketed, the death toll mounted and it became clear that the NHS was likely to become swamped with serious cases.

We can criticise Johnson and his political advisers for getting it wrong initially, but at least they had a strategy. We can give them credit for taking a line, and defending it in public. We can even give them credit for switching strategy when they realised the dangers and the likely consequences.

Government was acting and taking responsibility.

Now the UK government is easing restrictions. They argue that we are past the peak of infections and the curve is flattening. So what is the plan now? Let citizens be responsible for their own infection rate. Is Johnson’s government bailing out from responsibility?

No individual can be fully responsible for their own infection. To be sure, we can be careful, but infection rates are determined by everyone’s behaviour. Government might try to blame the socially irresponsible. That way, even if you are infected, it is not your fault, but someone else’s. Not the government’s, though.

This tactic of government – blaming citizens for government’s own policies – is longstanding.

Governments have been blaming us for their policies for years. Fat–shaming is a great sport. With 28% of the British population officially obese and 35% per cent overweight, there are plenty of targets. Diet plans, health plans and advice abound. Governments blame us for being fat.

Yet we know that it is sugar-sweetened beverages, high levels of salt and transfats, calorie-dense fast food that causes obesity. Whilst food prices overall have fallen by 15% in the last forty years, the cost of fresh fruits and vegetables has risen by 118%, fish by 77% and dairy products by 56%. The entire fall in food prices is due to pre-packaged and prepared foods.

But they don’t. Instead they lay responsibility for the obesity crisis on our shoulders.

What about homelessness? Is that the individual’s fault? Are young people squandering their disposable income on avocado toast instead of developing disciplined financial habits?

In fact, house prices in the UK have risen four-fold in real terms in the last forty years. Rents too have skyrocketed. Today, for the first time in the post-war period, young people are less likely to ever own their own home than their parents were. Whose fault is this?

Governments started to change their housing policies in the 1970s. First, they created a massive bias in the tax system, favouring not only home owners, but also rentiers. Second, they stopped seeing it as their job to ensure everyone could afford housing; they pulled out of supplying public housing and abolished rent controls.

If individuals are really responsible for the obesity crisis and the housing crisis, did they somehow start to become less responsible forty years ago? Some commentators blame the nanny state for creating a generation who expect everything to be given them on a plate. Yet how could this happen during precisely the period when government slashed its welfare spending? Rather, the crises are created by governments changing their policies.

People are responsible for the choices they make. But they can only choose from the menu of opportunities. We know people respond to prices, so making flights cheaper relative to other forms of transport will encourage more to fly. Make housing an investment and people will invest, inflating prices out of the reach of potential home-owners. Manufacture cheap fat-inducing foods that appeal to our taste buds and we will eat more of them.

Government is the main agent when it comes to the menu of opportunities. It should take responsibility. But it does not.

Governments have realized that by scapegoating citizens they can dodge their own responsibility and avoid blame. Boris Johnson’s Monday statement on the UK lockdown is only the latest example. Now we can get back to normal and it is up to citizens to ensure they don’t catch COVID-19 by behaving responsibly. So, once again, it is over to you personally.

Keith Dowding is Distinguished Professor of Political Science and Political Philosophy at the Australian National University. 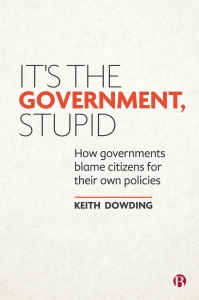 It’s the Government, Stupid by Keith Dowding is available for pre-order on the Bristol University Press website. Pre-order here for £15.99