Since the early reports in the Western media about coronavirus and the question of its mortality risk, the significance of age has been highlighted.

Unlike other flu-like viruses, it seemed, COVID-19 selectively harmed the oldest of those who became infected. Infants, children and young adults seemed, if not immune, then at least relatively unaffected. Early accounts of the outcome of those adults admitted to hospitals in Wuhan city, the assumed starting point of the pandemic, indicated that older age, chronic disease and multiple organ failure were each independent risk factors for subsequent mortality (Zhou et al., 2020).

These findings have provided the basis for most national public health warnings for who was most at risk and who most needs to ’self-isolate’. Age has most often and most loudly been highlighted as the vector distinguishing between the ‘vulnerable’ and the ‘invulnerable’. Otherwise, it seemed, we were all in this together.  The governor of New York even claimed that Coronavirus was ‘the great equalizer’.

Survival or death are not random outcomes, whatever the circumstances. With increasing age, people are increasingly likely to die, whether or not they are infected by a potentially deadly viral infection. The well-known Gompertz curve showing mortality exponentially rising with age has long served as a marker distinguishing ageing from the sheer passage of time. At the same time, what has also become increasingly evident is that factors other than age play their part in defining life expectancy and shaping the arc of mortality, including the various social divisions we have recently shown reflect a widening heterogeneity of the unitary category of old age (Gilleard and Higgs, 2020).

Gender has proved a major division; older men are at least a third more likely to die after becoming infected than are older women, with evidence of this gender divide emerging consistently in several countries, from China to Italy, and from Spain to the UK. Equally, if not more noticeable, is the divide evident in US data on COVID-19 mortality associated with ‘race’.  In various states and counties where such data has been released, African Americans are reportedly dying from the viral infection twice or even three times as often as their white Euro-American peers (Ball, 2020; Onder, Rezza and Brusaferro, 2020; Thebault, Ba Tran and Williams, 2020).

Chris Gilleard is Visiting Senior Research Fellow in the Department of Social and Policy Sciences at the University of Bath and the Division of Psychiatry at University College London.

Paul Higgs is Professor of the Sociology of Ageing at University College London. 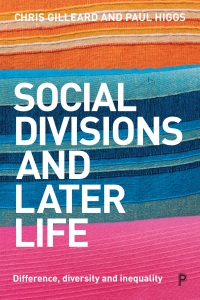 Social Divisions and Later Life by Chris Gilleard and Paul Higgs is available on the Policy Press website. Order here for £21.59.