One of the many tragedies of the UK response to the COVID-19 pandemic has been the way in which the British government, with shocking even-handedness, has ignored both old and new science. In shaping policy, little notice has been taken of old-style experimental research, while, as yet, even less attention has been paid to the new user-led and co-produced approaches which represents, perhaps, the biggest innovation in modern knowledge production.

For a long time, such co-produced research has seemed rather like the legendary North American Bigfoot or Sasquatch – more often talked about than seen. But now we seem to have entered a new stage in its history, where it has become real enough for at least one group of academics to attempt a demolition job on it in a peer-reviewed journal.

Under the questionable heading of’ ‘The Dark Side of Co-production’ (Oliver K, Kothari A, Mays N, 2019), they pose the rhetorical question, ‘Do the costs outweigh the benefits for health research?’. What is actually most interesting about this article is the strong response it has generated. A group of researchers and user/survivor researchers (including this author) have come together and – in an act of co-production itself – challenged the approach and conclusions of the original article: see ‘Lost in the shadows: reflections on the dark side of co-production.’ (Williams O et al, 2020).

The original article is faulted for its ‘imprecision’, ‘detrimental impact’ on future efforts to support co-production with marginalised groups, and its tendency to see co-production as a ‘problem’. The authors of the critique ‘warn against such a restricted view and argue for greater scrutiny of the structural factors that largely explain academia’s failure to accommodate and promote the egalitarian and utilitarian potential of co-produced research’.

This research, prioritising lived experience, with its particular ability to ask the most pertinent and helpful questions and connect research findings with effective follow up action, might be expected to have an especially valuable rule at a time of pandemic. It offers enormous insight into how COVID-19 and counter measures are actually experienced, how best to enlist people’s support, especially high-risk groups and marginalised people, in informing, owning and allying themselves with effective prevention, public health and harm-minimisation policies

At the same time, if there ever was a subject that lent itself to hard, traditional number-crunching science, then it is a pandemic. From the Victorians onwards we have learned both what works to identify trace, track and limit it, and the importance of isolating it and focusing on the most susceptible people and places.

The UK government seems to have paid scant attention to all this. They haven’t listened to first-hand voices or the scientists; neither the formal experts nor the experts by experience. Small wonder the results are such a mess.

Instead airports have remained open and medieval mantras like ‘herd protection’ invoked. Hand clapping and charitable efforts like Major Tom’s, have served as distractions . Westminster government almost seems to have confused its own survival with that of its people and has as good as prioritised the first at the expense of the second.

Because of this, as yet unknown tens of thousands have died unnecessarily. Ruthlessly neglected social care has become the site for the loss of disproportionate numbers of the most vulnerable of citizens, who we knew from the start were the most liable to be killed by the virus.

An enormous amount of research is now being commissioned in the wake of the outbreak. We must hope at least that this is truly co-produced, puts service users at its heart, and doesn’t lose out in the current feeding-frenzy. More to the point, we would have all fared much better if more notice had been taken – from the start of the pandemic – of what we already knew from existing research and the lived experience of those disabled people and others with long term conditions for whom ‘lock-down’ was not a temporary aberration but a day to day reality. How much our leaders could have learned from both, how many lives saved and losses avoided.

Peter Beresford OBE is Professor of Citizen Participation at the University of Essex and Co-Chair of Shaping Our Lives, the user led organisation and network. He has authored and edited more than 20 books and many journal articles as well as writing regular columns for the Guardian and the professional press. He has a longstanding track record of work in the field of participation and citizen involvement as academic, service user, researcher, educator and activist. 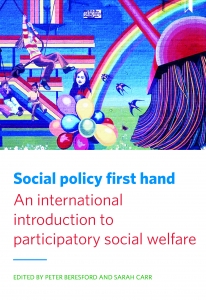 Image Credit: “My Life Through A Lens” on Unsplash