Austerity and the COVID-19 crisis: There is another way

Austerity, imposed on us with the election of the Cameron-Clegg coalition government 10 years ago, is about more than mere public expenditure cuts. It is a particular model of capitalism, generating huge social and economic divisions that are being particularly exposed in the current COVID-19 crisis. How did we get here and how can we create an alternative and more socially just economic and social model which can move the UK out of its current impasse?

As I show in my book, Austerity, Welfare and Work, austerity is integral to neoliberalism, comprising a class strategy focusing on the redistribution of income and power away from the working class and in favour of the rich. For Mark Blyth, austerity ‘is not just the price of saving the banks but the price that the banks want someone else to pay’. That price is the massive cut in public expenditure and wholesale attacks on public services and welfare. According to Andrew Sayer, estimates of the size of the UK bank bailout range from £289 billion to £550 billion – “or nearly £10,000 for every British resident … (so) by the end of 2009 the total value of bailouts in the US, UK and Euro area equalled $14 trillion, or almost a quarter of the world’s gross domestic product”.

Austerity has its origins in Thatcher-inspired governments (including New Labour). Austerity/neoliberalism comprises a ‘growth model’ comprising two key elements. First, deregulation of labour markets, labour flexibility, capital mobility and global finance which are key sources of wage stagnation and insecure work. Downgrading employment rights and attacking trade union organisation is a key element of this. The welfare reform agenda involved a stricter conditionality and work-first regime as a way of moving people into work – often low paid and insecure.

Second, welfare cuts are inextricably linked to the shrinkage of the social state in relation to all its four main roles: as a source of income support; as a provider of free or subsidised public services; as a direct employer; and as a defence against marketisation of society.

The scale of the economic and social crisis before the COVID-19 crisis cannot be overemphasised and the lockdown exposed both the vulnerability of the economy and the social safety net. The New Economics Foundation (NEF) estimates that austerity has suppressed the level of Gross Domestic Product (GDP) by almost £100 billion in 2018/​19 alone.

There are currently 14 million people in poverty and over 5 million workers in insecure and low-paid work. The government’s schemes to mitigate the impact of the COVID-19 lockdown such as the Job Retention Scheme (JRS), Statutory Sick Pay (SSP) and Self-Employment Income Support Scheme (SEISS) have been criticised by the Institute of Employment Rights (IER) because of their inadequacies. The IER estimates that nearly 11 million workers could face destitution because many people are not eligible to be placed in the schemes and therefore vulnerable to unemployment. This has led to unprecedented numbers (2.5 million and growing) applying for Universal Credit (UC).

Right now there is no evidence that the Conservative government will abolish the five-week wait for Universal Credit or write off the advance loans, or do away with the two-child limit in the Child Tax Credit and the benefit cap – the latter two ‘penalties’ which, from the first day of implementation, have had major detrimental impacts on the incomes of families with children. Even once people are able to access UC, the level of benefits is extremely low and totally inadequate to live on. The basic rate of UC is worth around one-sixth of average weekly pay (17%).

The Women’s Budget Group has observed that there are over 3 million people in jobs at high risk of exposure to COVID-19 in the UK – 77% of them are women. Over 1 million of these workers are low paid – 98% of them are women. The majority of the front-line jobs in health, social care and food distribution are occupied by women, BAME workers and immigrants; those jobs are low paid, insecure, precarious and dangerous because of the lack of protection against the virus. The high rate of deaths among BAME communities has become a major political issue particularly in the context of the Black Lives Matter movement.

A crisis can provide opportunities for a different model. We are witnessing a rapidly disappearing safety net with more and more people becoming reliant on food banks. In the short term, and for the duration of the outbreak, the TUC and New Economics Foundation have called for a raise in the basic level of Universal Credit and legacy benefits to £260 a week, representing 80 per cent of the national living wage, or 47 per cent of total average weekly earnings, which is seen as a reasonable replacement rate. The TUC is also pushing for the implementation of a job guarantee scheme for newly unemployed and the Institute of Employment Studies is proposing the development of back-to-work services for unemployed in the form of intensive support, counselling and training.

In the longer term, a newly revamped social security system based on principles of social justice and that genuinely combats poverty and inequality should replace Universal Credit. This must be closely aligned to an economic recovery plan such as the Green New Deal and involve genuine social dialogue and involvement of the trade unions along with businesses and the government. 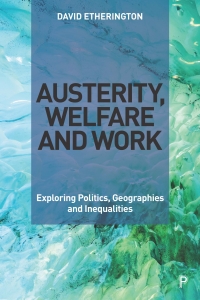 Austerity, Welfare and Work by David Etherington is available for pre-order on the Policy Press website. Order the hardback here for £60.00, or the EPUB for £21.59.