Studies concerning police corruption have been part of criminology literature since the 1960s. Academics have defined numerous categories of police corruption and violations that span beyond linear legal perspectives on the abuse of authority for private gain – namely bribery and extortion.

There have also been tests conducted with police officers on what constitutes an integrity or ethical violation, and anti-corruption has been part of pre- and mid-service police training in many societies. Undoubtedly, corruption hinders public trust in the police as law enforcers as well as state actors, which results in a perceived illegitimacy of the police force and even of the state. This social harm is more serious in conflict-stricken societies that are more susceptible to insurgencies that use police and state corruption as part of their grievances in their recruitment manifestos.

Police corruption can be linked to administrative and political corruption. The abuse of public office for private benefit may be an ingredient of the corrupt practices that are part of the ‘socialisation process’, when rookie officers learn from superiors on the beat. If this is the case, then a new police officer may take a free cup of coffee, discounted meal or other minor gratuity from a local café owner in exchange for offering increased police presence around the premises. In the West, this form of gift-giving is considered corrupt because it may lead to more severe forms of corruption, as the 1972 Knapp Commission famously identified, with ‘grass-eaters’ accepting small gratuities and ‘meat-eaters’ specifically looking for opportunities to aggressively exploit their authority for financial gain. However, in many Asian and African societies, gift-giving or a minor tip is considered as a means to preserve social and business relations. At the same time, corruption is also considered an evil or wrongdoing in these cultures which makes corruption, including police corruption, an extremely vexed area.

My book Investigating corruption in the Afghan police force: Instability and insecurity in post-conflict societies provides an overview of the literature concerning police corruption and reform efforts in conflict-ridden states that share similar challenges, namely changing and overlapping mandates from the competing interests of international actors, often with a lack of cultural knowledge. Subsequently, I cover the social construction of corruption within a range of non-Western societies, including Papua New Guinea, China, Russia, India and Afghanistan. This is followed by an Afghanistan-specific case study that incorporates empirical analysis of a survey and structured interviews conducted with street-level police officers and examines other factors that have contributed to pervasive corruption. The respondents indicated that corruption means not performing work duties correctly, and appointments based on patronage-relations, bribery and extortion. The latter is compliant with Western criminology literature; yet, it is a local understanding by police officers themselves that can help to better comprehend police corruption from a social constructivist perspective.

Although defining corruption is crucial to better curtailing it, its setting in a war-torn environment is often complex. In the context of Afghanistan, several previous regime changes – from the Soviet invasion, Mujahidin militias and Taliban-based religious and anti-vice enforcement officers – have affected policing and security. Knowledge of these changes has not been fully considered by external intervention agents nor by the agreement at Bonn in late 2001 that empowered anti-Taliban warlords with state posts, resources and patronage-relations with a selected interim chair of a democratised Afghanistan. The Bonn Agreement excluded the Taliban, resulting in prevalent attacks which reached the attention of the international community. In February 2020, the United States signed a loose peace deal in Doha with the Taliban to withdraw troops and encourage the Afghan government to release further Taliban detainees in exchange for a ceasefire. Despite these efforts, insecurity remains high with an active Taliban insurgency and emerging presence of Islamic State’s Khorasan Province in eastern Afghanistan and Pakistan. On 2–3 August 2020, Islamic State claimed an attack enduring nearly 20 hours on a prison in Jalalabad, eastern Afghanistan, in an attempt to free over 1,000 Taliban and Islamic State combatants.

Investigating Corruption in the Afghan Police Force addresses the need to analyse corruption from both a social constructivist lens and a political economy approach to assess the relationship between political elites and economic agents. Contemporary anti-corruption strategy in Afghanistan and within the Afghan police force is examined with a political economy analysis to reveal that political meddling, cronyism and patronage hinder such strategy and police reforms. These are some of the political drivers of corruption within the Afghan police force. In addition, the economic drivers of corruption revealed by respondents suggest that low pay and the police are posted randomly (and not necessarily geographically close to home) have led to further economic hardship with fewer breadwinners per household in distant provinces. The cultural drivers of police corruption are also explored, revealing little emotional investment, sense of mission or noble cause in Afghan policing – unlike within militias during the Mujahidin era – in working hard for the country. This is debatably due to changing international mandates, and is in line with similar failures of police reform in other conflict-stricken countries, namely Iraq. The three drivers of corruption fit the political economic and social constructivist framework and help us to better understand the dynamics and complexities of corruption in war-torn societies such as Afghanistan.

Danny Singh is Senior Lecturer in Politics and International Relations at the Department of Humanities and Social Sciences at Teesside University. 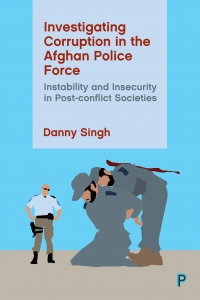 Investigating Corruption in the Afghan Police Force by Danny Singh is available on the Policy Press website. Order the hardback here for £64.00, or the EPUB for £21.59.