There seems to be a lot wrong with the economic theory and beliefs that Anglo-American governments in particular have been guided by over the past few decades. They are taking us in exactly the opposite direction to fulfilling the UN’s Sustainable Development Goals, which identify how we might achieve a better and more sustainable future for all.

Though most economists might well agree that their field of study has shortcomings, the pursuit of self-interest as the key to economic efficiency continues to guide political action, leading us to many and various forms of destruction which are now thoroughly documented as reported by Sir David Attenborough in the BBC’s Extinction: The Facts.

Even Milton Friedman acknowledged its outcomes were ‘disappointing’. Friedrich Hayek, whose theories influenced Margaret Thatcher, accepted in his 1974 Nobel Memorial Lecture that ‘as a profession we have made a mess of things’. Cambridge economist, Ha-Joon Chang, argued that economics is ‘95% common sense, made to look difficult with the use of jargons and mathematics’.

Economics may be made to look difficult, but the orthodox version is dangerously simplistic. It takes no account of qualitative issues. Moral values and long-term impacts are way beyond its capability. Instead of these limitations being acknowledged, such matters are simply excluded from calculation, as though they have no economic significance. The long term may be beyond economic calculation, but it is of increasingly obvious importance to mankind and our survival. The focus of the SDGs on 2030 indicates how short the long term now is.

Such limitations are typified by the acceptance of Gross Domestic Product and its growth as measures of economic progression. The inadequacy of GDP has long been noted for its lack of distinction between the various forms of value creation and value extraction. A pound is a pound and contributes equally to GDP growth despite obvious long term differences in their contribution to the real economy and the common good. A pound spent on long-term technological research is not differentiated from a pound spent betting on some financial movement.

A hugely damaging oversimplification is to treat the economy as a singularity which can be best addressed by a single solution: the for-profit business, the corporate officials of which have no ‘social responsibility other than to make as much money for their stockholders as possible’ (Friedman, 1962).

Remaking the Real Economy distinguishes three separate layers of the economy, each of which needs to be understood and treated differently if it is to achieve its potential progression.

Modern society is dependent on a base layer of infrastructural provisions and socio-legal necessities which provide the essentials of everyday life, many of which are necessarily supplied free of charge at the point of delivery. Where a charge is made, it is as a contribution to the cost of supply, rather than to maximise shareholder take.

Moreover, delivery of the socio-infrastructural economy remains the responsibility of the state, whether or not provision is contracted out. The state needs therefore to retain the skills and competence to coordinate delivery. Privatising and outsourcing socio-infrastructural provision to private for-profit organisations, has a predictably sorry history. Remaking the real economy will require rebuilding public sector expertise which has been greatly reduced over the past few decades.

Beyond that base layer of the real economy is a layer which includes non-mandatory provision of a wide variety of products and services which are best delivered by private-sector providers operating in genuinely competitive markets. Public involvement is only needed to protect and preserve competition. That will require breaking up monopolistic positions that have been permitted over the past few decades and rebuilding effective regulation which has been largely dismantled.

Beyond that progressive-competitive layer of the real economy is a technological-revolutionary layer of activity where the fundamental aim is to develop ecologically sustainable technologies so that permanent progression without destruction might be achieved. Both privately owned competitive for-profit organisations and public sector bodies contribute to this part of the real economy. Public sector organisations have the undoubted advantage of being able to invest in blue skies research, with the aim of achieving fundamental change without having to achieve an immediate surplus.

Mazzucato (2013) pointed out that ‘most radical new technologies … trace their funding to a courageous risk taking state’. Defence and space technologies, plus the National Nanotechnology Initiative and Apple’s iPod, iPhone and iPad are all based on state-developed technologies.

Political economic decisions need to be based on real knowledge and understanding of how the three different layers of the economy work, and how they could contribute to achieving rather than destroying the UN’s SDGs by 2030.

Gordon Pearson, formerly Head of Department of Management and Director of MBA programmes at Keele University, has extensive experience in strategic business development, and is the author of eight books in the areas of strategic management, competition and co-operation. Find out more at https://gordonpearson.co.uk 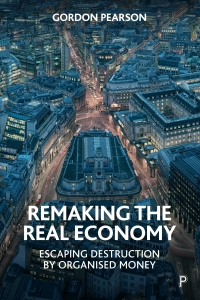 Remaking the Real Economy by Gordon Pearson is available on the Policy Press website. Order here for £19.99.