The coronavirus pandemic has highlighted and exacerbated pre-existing inequalities within society. Groups of women who are economically and socially disadvantaged and who have shouldered the impact of years of austerity policies and welfare reform – black, Asian and minority ethnic, disabled, low-income women and single mothers – are, for instance, experiencing increasing vulnerabilities and hardships in this present context.

The COVID-19 crisis offers particular challenges for single mothers (90 per cent of single parents) and their children. With increased living costs due to children not attending school or nursery, having their maintenance payments reduced or withdrawn, and tending to work in more precarious, low-paid jobs which do not offer the option of remote working, these women are facing a so-called ‘triple penalty’. Since 47 per cent of single parents already live in poverty, reports have detailed the difficulties mothers have experienced with self-isolation and food poverty. Researchers have highlighted how the pandemic has placed additional pressures on already tight budgets, meaning many have had to rely on emergency provision, such as foodbanks.

The importance of schemes and provisions to redress inequalities caused by the pandemic has been highlighted by various commentators. A high-profile public campaign, led by the England and Manchester United footballer Marcus Rashford, drove the UK government to make a U-turn and commit to providing free school meals to eligible children in England during the 2020 summer holidays. This was mainly in the form of weekly shopping vouchers. However, there remains the fact that 40% of adults with children did not receive a substitute for free school meals and the ongoing issues of stigma and lack of choice offered by the vouchers. Rashford has since called for Boris Johnson to extend this provision until Easter 2021. This motion was rejected by parliament last week, despite widespread criticism and outrage from some MP’s, local councils, charity organisations and members of the public.

Political rhetoric surrounding the provision has added to forms of stigmatisation. When asked on Twitter why it took Marcus Rashford to ‘make a stand for the hungry children in society’, Kevin Hollinrake, MP for Thirsk and Malton replied: ‘Where they can, it’s a parent’s job to feed their children’. The response from Hollinrake not only fails to notice the importance of this form of social provision and care for vulnerable groups, but also does not acknowledge that people’s ability to navigate through this difficult context has been diminished by their experiences of the pandemic and preceding years of austerity. The narrative of ‘parental responsibility’ – in this case read ‘low-income parental responsibility’ – instead shifts blame for the existence of these problems onto those who are most in need of support. Such discourses of individual/parental responsibility and self-reliance have not emerged only within this current crisis. They have a very long history. Parallels can be made to austerity discourse – past and present – where those who have been most affected by cuts and reforms are simultaneously met with contempt and shamed for their inability to ‘weather the storm’ and provide for their families. These discourses can also be read in heavily gendered (i.e. mothering) terms. In this framework, structural dimensions that help to promote inequalities are silenced.

Over the past six years I have been exploring how such discourses build on histories which reproduce and legitimise material, symbolic and institutional violence in the present. Taking a gendered focus, this genealogy provides an analysis of the workings of the state, highlighting how particular women – such as low-income single mothers – have continually been used and/or blamed during different times of crisis. I have also interviewed women from diverse backgrounds about their experiences of austerity and welfare reform. What became clear when speaking to these women was the degree to which austerity’s impact was felt more harshly by those from working-class and minority backgrounds. The single parents, job seekers and the so-called ‘working poor’ not only had to navigate within harsher economic conditions but felt demonised and misrepresented, frequently portrayed in political terms as economically unproductive, depleting or undeserving of welfare, and in need of moral reform. One of the women I interviewed was Cherry, a single mother who lived in London. Cherry and her daughters had only just moved into temporary accommodation having spent time sleeping rough. Despite working part-time at a local supermarket, with £39 a week on average to feed and clothe herself and her daughters, Cherry’s situation was extremely precarious. Finding it difficult to access state support, food vouchers became extremely important. Without this network of support, ‘getting by’ would have become even more challenging.

Despite the importance of these support organisations and their growing normalisation, like other women I talked to, Cherry often felt reluctant, ashamed or embarrassed about using the service. These feelings were aggravated by representations in ‘poverty porn’ reality television shows, and by political and public discourse, which questioned the lifestyles and personal attitudes of people using the food bank. Worried people would find out she was using the organisation, Cherry stretched the food parcels she received as far as possible and struggled between each visit. As Marcus Rashford warned in his reply to Kevin Hollinrake’s tweet about parental responsibility, discourses such as these can, and in Cherry’s case do, prevent people from asking for help when they are in dire need. With the added challenges Cherry might be facing in this current context, these schemes and provisions will be all the more important.

Austerity has resulted in increased inequalities which have differently affected women and minority groups. This has been exacerbated by the continuing impacts of the pandemic. Despite this, there is a continuation of a particular type of politics. One which individualises social inequalities and blames people for their situation. In the context of austerity, this rhetoric was used to blame the crisis on those at the sharp end of the cuts. The same language is now resurfacing, employed to deny the need for social provision to those who are most in need. Exposing the disjunction between aspects of political rhetoric – past and present – and the experiences of those most at risk during COVID-19, is therefore essential to making interventions to break the cycle of this toxic narrative.

Vicki Dabrowski is Associate Lecturer in Sociology at the University of York. Her research interests include gender, class inequality and the role of the state. 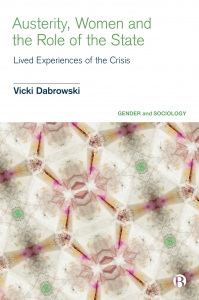 Austerity, Women and the Role of the State: Lived Experiences of the Crisis by Vicki Dabrowski is available on the Bristol University Press website. Pre-order the hardback here for £60.00 or the EPUB for £21.59.