A few months after the 6 January storming of the US Capitol, news reports still include varying claims about who took part in it. Intriguingly, some still insist that antifa (antifascist activists and frequent bête noire of the right) were involved in the insurrection and that they caused the trouble by impostering as Trump supporters:

‘…the claim that antifa was involved has been repeatedly debunked by federal authorities, but it has hardened into gospel among hard-line Trump supporters, by voters and sanctified by elected officials in the party. More than half of Trump voters in a Suffolk University/USA Today poll said that the riot was “mostly an antifa-inspired attack.” At Senate hearings last week focused on the security breakdown at the Capitol, Senator Ron Johnson, a Wisconsin Republican, repeated the falsehood that “fake Trump protesters” fomented the violence.’
(New York Times, 1 March 2021)

What makes this newsworthy for outlets like the New York Times is not the fact that it could have been antifa activists involved in the insurrection but rather that some are still making such a claim. The implied duplicity of these claims is striking, given that Trump at the end of the storming declared how he ‘loved’ them. Were the activists so cunning that they not only fooled federal authorities, but also the President himself?

Suspicion of impostering is a force to be reckoned with. The mere suggestion that impostering takes place frequently leads to further uncertainty and disorder. If people may not be who they claim they are, what else is not what it appears to be? Was the Capitol security in on the trick as well? What about the much-maligned mainstream media (MSM)? Imposters are trouble, but mere suspicions about them cause trouble as well – they are contagious.

Another illustration of how disturbing a suspected imposter can be was provided by the actor Rowan Atkinson in The Graham Norton Show a few years ago. Talking about his famous character Mr Bean, he told an anecdote of having being approached at a car parts dealer by a man asking him if he had ever been told of his likeness to Mr Bean. What follows is Atkinson’s fascinating and humorous retelling of how the conversation unfolded:

– [Rowan Atkinson] And I said, well actually I am the actor who plays Mr Bean.
– [RA impersonating the other man laughing in disbelief] I bet you wish you were!
– [RA] And then followed this bizarre conversation in which the more I tried to claim that I was the person, whom he thought I merely resembled, the less he believed me. But what was funny was how close he thought I was to…, he said…
– [RA impersonating the other man] The resemblance is [pause] uncanny! Have you thought of doing any look-alike work? Like stag nights and hen nights. You could go as “Mr Bean” [doing air quotes].
– [RA] Not only was he not believing me, but he was getting quite annoyed that I was pursuing this line of “I am Rowan Atkinson”. And clearly he thought I was this total arse who, just because I looked a bit like Mr Bean, goes around the country actually claiming to be Mr Bean.
The Graham Norton Show, aired 5 October 2018 on BBC One.

Atkinson’s retelling is evocative and funny. It also comprises several layers of impersonation and disbelief. The result of his insistence on being the actor who takes on the character of Mr Bean was that Atkinson was increasingly taken as a mere impersonator of the actor who plays Mr Bean. What emerges from this story is that once suspicions have been raised, attempts to settle the matter may make it worse. Often, attempts to definitively prove something raise questions about what evidence or test would be sufficient: how can we be sure, for instance, that the passport with Rowan Atkinson’s name is not also a fake?

When one starts looking for imposter dramas, such as the two exemplified above, one sees potential impostering and its consequences everywhere. In the news we read about the possibility of using deceitful deep fakes – algorithmically generated videos which allow people to convincingly impersonate politicians and celebrities. On screen we have the 2020 Oscar winner for best picture, Parasite (2019), about a family posing as unrelated helpers for a rich family, and the synthetic humans in Blade Runner 2054 (2018) and Westworld (2016–2020), to name just a few. In the recent novel Fake Accounts (2021) by Lauren Oyler, the protagonist finds out that her boyfriend has a different online identity as a conspiracy theorist.

Surprisingly, traditional social theory has predominantly seen the imposter as an aberration and deviation from normality. The assumption is that when imposters are caught or unmasked, the social order snaps back into place. But as we’ve seen, these incidents scar, disrupt and destabilise the social order in sometimes irreconcilable ways. In our new volume, The Imposter as Social Theory, we instead bring the figure of the imposter, as well as the dramas, disruptions, reactions and questions they engender, to centre stage. We consider the advantages of a social theory that understands imposters as primary engines of indeterminacy, uncertainty and disorder. The book further provides a rich set of diverse case studies to sensitise you to see and appreciate the many imposter dramas that surround us.

The next time you see suspicions of an imposter arise, notice the puzzle that invariably follows: is what appears to be the case actually going on? It is through working on this puzzle that those involved not only change the fate of the alleged imposter, but transform society along the way – upending previously taken-for-granted categories, practices and identities.

Claes-Fredrik Helgesson is Professor and Research Director at the Centre for Integrated Research on Culture and Society (CIRCUS) at Uppsala University.

Else Vogel is Assistant Professor at University of Amsterdam. 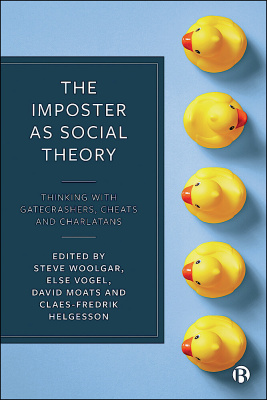 The Imposter as Social Theory edited by Steve Woolgar, Else Vogel, David Moats and Claes-Fredrik Helgesson is available to order on the Bristol University website for £64.00.