Over the summer, people across England were drawn to the successes of the men’s football team at Euro 2020, with many commenting on the likeability of the players. As the new Premier League season begins today, Stephen Burrell looks at how Gareth Southgate’s team have been challenging restrictive notions of masculinity.

In recent years, from #MeToo to #EveryonesInvited, we have seen growing conversations about contemporary definitions of masculinity, and their harmful impacts on men and boys and the people around them. However, over the summer some of these masculine stereotypes have come into question in an unexpected setting – the England men’s football team.

Since he became manager, Gareth Southgate has often, in quiet and understated ways, appeared to model a more caring way of being a man. He articulates deep concern about the players’ personal and professional development, and their emotional and physical wellbeing. This has been apparent in his support of their taking the knee, and in response to the racist abuse England players have repeatedly received, most recently after the Euro 2020 final. At times Southgate almost appears to embody a father figure for the team – though not condescendingly so, as he clearly trusts them to make their own decisions. He communicates with emotional intelligence and sensitivity, such as in his efforts to make supporting England inclusive of everyone, regardless of background. Southgate emanates humility, avoiding getting carried away in victory or defeat, and expressing self-awareness about the (in)significance of football which has been particularly pertinent during the pandemic.

His approach seems to have had a big impact on the England team. Many of the players have spoken about the sense of togetherness throughout the squad, and the inclusive and supportive environment that Southgate has fostered. This is visible in the way that this young team play and how they have conducted themselves, where they seem able to be themselves and thrive, and have fun in the process. It hardly seems coincidental that under Southgate, the England men’s team have had some of their best major tournament performances.

This illuminates the positive effects that an ethic of care in leadership can have on an organisations culture. It is also somewhat against the grain in the macho context of men’s elite football, and indeed in wider society, where men and boys are still rarely taught to develop such caring, emotional skills. It is interesting to contrast, for example, how Euro 2020 final goal-scorer Luke Shaw experienced public bullying from Jose Mourinho when struggling at Manchester United, but has flourished for England with Southgate’s support.

It’s not just Southgate who has been challenging ideas of masculinity. Under his leadership, players have been doing this powerfully too. The passion with which they have spoken out against racism has demonstrated that young men can take action in thoughtful ways against social injustice. England’s Black players have shown immense bravery and leadership in this regard, and the actions of Southgate and the team demonstrate that white people have a responsibility not to stay silent, but to stand as allies against racism.

Similar is the care Marcus Rashford has expressed in holding the government to account about the millions of families facing food poverty, and in promoting children’s reading (something boys particularly struggle with). During the Euros, Harry Kane wore a rainbow armband and Jordan Henderson wore rainbow laces in support of LGBTQ+ rights, which feels significant in a sport where there are still no openly gay professional male players. Players such as Tyrone Mings have spoken about their mental health struggles, which masculine expectations hold many men back from doing. Kalvin Phillips has supported the White Ribbon campaign against men’s violence towards women. It has been poignant to see several players, many of whom have experienced substantial hardship growing up, discuss the significant role of their mothers in their lives. Their emotional maturity has been striking; for instance in Rashford, Jadon Sancho and Bukayo Saka’s responses after their final penalty misses, with 19-year-old Saka stating: “love always wins”.

It is notable that this has been during a time when football has felt particularly emotionally charged against the backdrop of COVID-19, which has forced so many of us, men and boys included, to reflect on the fragility of our lives. Euro 2020 became even more emotive in the wake of Christian Eriksen’s collapse, when the intense vulnerability, as well as moving mutual-support, of the traumatised Denmark players was on public display.

Some of these actions may seem small, but the defensive reactions that taking the knee has garnered from some, including senior politicians, demonstrate precisely why they are so important. It is interesting that some among England’s fanbase have never fully embraced Southgate, for example because he is not perceived as gung-ho or ‘tough’ enough, perhaps pointing to subliminal discomforts with his more sensitive approach. However, the widespread fondness for the manager, this England team and their anti-racist stance suggests that whilst the backlash is vocal, it may be swimming against the tide of social change.

It might be overly simplistic to view distant figures such as professional footballers as significant role models for young people, but it is vital that boys see that there are a variety of ways of being a man, and they don’t have to conform to rigid masculine norms. Both the Euros and Olympics have illustrated that sport can play an important part in creating conversations about gendered expectations.

With a new football season starting today, this is a significant development, given that we also witnessed less healthy expressions of masculinity during the Euros, such as the violence and aggression of some fans around the final, highlighting how football continues to provide an excuse for a range of harmful behaviours among some men. Two high–profile managers are currently facing domestic abuse-related charges, and at a structural level, football’s male-dominated governing bodies continue to do little to seriously address racism. This demonstrates how unique the leadership provided by Southgate and his team is. Indeed, it also contrasts with the uncaring, nonchalant responses to COVID-19 we have seen from some male political leaders.

The question remains whether all this indicates, and whether it will help to instigate, wider changes in constructions of masculinity within football and beyond.

Stephen Robert Burrell is a Leverhulme Early Career Fellow in the Department of Sociology at Durham University in the UK, and co-author of Men’s Activism to End Violence Against Women. He also co-hosts a new podcast, ‘Now and Men: Current conversations on men’s lives’. 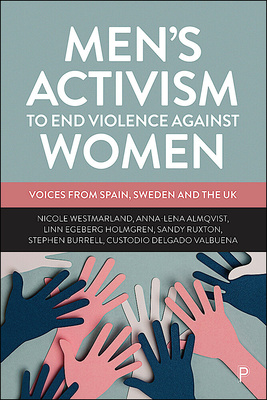