2020: A warning shot for climate change

Taken from the introduction to A Climate Pact for Europe: How to Finance the Green Deal by Anne Hessel, Jean Jouzel and Pierre Larrouturou.

The year 2020 will have been one of all-out experiments to try to save our skins from a deadly risk that spread in a few weeks – COVID-19. This crisis has revealed the fragility of our economies, which have not been able to maintain the production of life’s essentials locally – food, medicines and so on.

This crisis has also obliged us to experience lives of low consumption and no travel, which many have found rather pleasant. This crisis makes us fear the next: indeed, epidemics can arise from thawing permafrost, which is happening too quickly and reactivating antediluvian viruses. Finally, this kind of crisis will be totally destructive in the event of a similar epidemic under a heatwave.

This warning shot convinced many of our fellow people to act against the deregulation of our climate, but there are still those who doubt the reality of global warming: some realize that warming is happening but are not aware of the gravity of what is on the way; others know that it is serious but do not wish to address the problem. Although written before, the COVID-19 pandemic makes this book highly topical since the book highlights the consequences of the economic globalization developed at a brisk pace since the early 1980s, as well as its fragility, with near-monopolies of production concentrated in certain countries. Being on the other side of the world, these monopolies deprive many people of equipment to react to the pandemic – objects as simple as surgical masks or gloves.

Faced with the urgent need to restart the economy, some dream of returning to the ‘world before’, making the pandemic a mere parenthesis. Others want to take the opposite view and preach the relocation of production, even the return to economic sovereignty. The closure of national borders during the health crisis has shown, they say, that the only community that can stand up in a crisis is the good old national community inherited from the past. These two apparently opposite attitudes share the confusion between an eminently reversible economic globalization and the globalization of interdependencies between humanity (and its societies) and the biosphere, which is irreversible.

The speeches on relocation and sovereignty reinforce the nationalist counter-reform, embodied by Donald Trump, ruining the efforts of multilateralism and reinventing ‘the enemy from abroad’ at the very moment that the pandemic is embodying the breadth of global interdependencies and the inability of a nation to cope with the disease through national decisions. The pandemic poses, on a planetary scale, the major question of responsibility, from the responsibilities of each of us – wearing a mask to protect others – to the responsibility of the various private and state actors in the emergence and spread of the virus. The pandemic reminds us that good health for all should be a global, common objective.

This book aims to restore the integrity of the climate through a major relaunch of the real economy. By doing so, it will lead the way to a more serene climate, both in politics and in the weather, that better protects us from subsequent pandemics. Doctors understand that Europe was on the brink of a catastrophe from which our societies would not have survived: the COVID-19 pandemic combined with a heatwave like that of 2003 or 2019. In such a case, the confinements would have been made impossible, and the pandemic could have killed perhaps a quarter of the European population by quickly saturating the hospitals.

The health crisis we have just experienced brings an inspiring idea: the measures taken to stop the COVID-19 pandemic demonstrate that it is realistic to rapidly make political decisions to allocate huge loans and a substantial budget to defeat a scourge in Europe. It is possible; we are doing it! In a few weeks … This proves that the solutions proposed in this book (an annual loan of € 1,000 billion and a European budget of € 100 billion per year) are realistic and acceptable political solutions should the urgency of climate change be perceived as that of the health crisis. This aspect – ‘Just do it. It is easy. It is a political decision’ – is the overwhelming lesson of the COVID-19 crisis – a lesson that enchants us, and one that would have enchanted the incurable optimist Stéphane Hessel.

Anne Hessel is a Doctor of Medicine and Doctor of Chemistry. She is a founder member of “Agir pour le climat” and member of the Scientific Council of “Defismed”. Before retiring, she taught and practiced medicine at hospitals, and was active in many social movements since the 1960s. 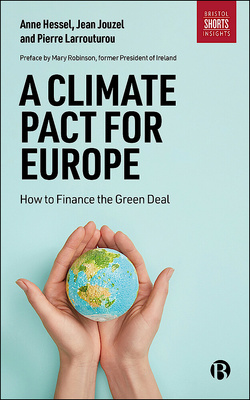 A Climate Pact for Europe: How to Finance the Green Deal by Anne Hessel, Jean Jouzel and Pierre Larrouturou is available on the Bristol University Press website. Order here for £7.99.