Offering the power of collectivity in a law-thick society

Law is everywhere. In our workplaces, in our homes, even in the air we breathe, the water we drink and the food we eat – our everyday lives are thoroughly mediated by law, and increasingly by the formal laws of the state.

Over the past century, we have seen the expansion of law to a wide range of social matters that were previously regulated through informal norms and customs. We have also seen the increasing density of law with greater and greater complexity of existing directives. We are, in short, living in ‘law-thick’ societies.

This has given rise to concerns about the capacities of people to navigate the ‘law-thick’ worlds in which they find themselves. That is why the concept of ‘access to justice’ is absolutely critical. A pillar of the post-war British social welfare state, ‘access to justice’ is not only a fundamental right on its own grounds, but it also has the traits of a meta-right: the enforcement and realisation of rights often presupposes effective access to justice, or as T. H. Marshall (1950) observed, other rights become illusory in its absence.

To put it another way, there need to be paths available for people to resolve the legal problems that arise in their daily lives, as well as paths to help them prevent those problems from occurring in the first place.

This does not only include the problems we may face as individuals – landlord disputes, personal injury, family conflicts and the like – but also those we face as members of groups; problems that are as diverse as they are widespread in our late modern societies. From mass data breaches affecting millions and mass injuries from faulty products to mass human rights violations and mass environmental injustices, the problems people face in our global world are often collective in nature and require collective forms of claims-making.

These are problems that are often irrational, impractical or outright impossible to pursue individually against what are often powerful opponents, typically transnational corporations like Google or ExxonMobil. In this context of collective legal problems, there is a need for collective legal empowerment, for forms of collective claims-making that provide strength-in-numbers and allow vulnerable people to band together against powerful wrongdoers.

A key innovation that regimes around the world have introduced to address these collective legal problems and promote collective access to justice has been the class action. Since the 1990s, class actions have spread globally – from their modern origins in 1966 as a vehicle to address segregation and discrimination cases arising out of the Civil Rights Movement in the United States – to over 35 regimes. This reflects the growing recognition that such civil procedures have an important role to play in addressing collective justiciable problems.

Despite this recognition, however, England and Wales do not yet have a comprehensive class action regime. To date, class actions are only available in competition law. In every other area of law, then, groups do not have access to the type of justice that class actions provide: for claims that are individually non-viable, whether because the costs of pursuing them outweigh their respective value, or because of social or psychological barriers that can be overcome through the strength-in-numbers dynamic of class actions. That is why active citizens such as Richard Lloyd, a consumer rights advocate and former director of Which?, have tried to use other methods, such as the old representative action (CPR rule 19.6), given the absence of the more suitable option of a statutory class action. Google’s victory against Mr Lloyd in the recent Supreme Court decision in a case involving the allegedly secret tracking and commercialisation of the internet activity of 4 million iPhone users simply underlines the inadequacy of such other methods.

In 1996, Lord Woolf set out the first objective of the new procedures to deal with such harms in the seminal Final Report on Access to Justice. That was a quarter of a century ago. Today, we are for the most part no closer to addressing this access-to-justice gap.

As we might expect, however, there has been much controversy over introducing class actions, not least arising out of the robust lobbying campaigns of various business interests and actors who do not wish to be held liable for their misconduct and thus seek to restrict class actions, where they exist, or prevent them from being introduced altogether, where they are not yet available. It is easy enough to see where the battle lines are drawn by simply looking at the lobbying efforts that arise whenever class action reform is being discussed: in one corner, we often find a range of human rights organisations, groups representing disabled people, low-income tenants, environmental protection and the like, who advocate for their introduction and/or strengthening; and in the other, there is typically a range of groups representing banking and commerce, insurance conglomerates, resource extraction companies, motor vehicle manufacturers and the pharmaceutical industry, who oppose class actions.

Perhaps more than most areas of civil justice reform, the collective action space is a field of contestation between competing social and economic forces, and a good first step in addressing this access-to-justice gap and challenges to reform might be to directly identify these interests. In truth, it does not take much effort to uncover the politics of the procedure.

As the Supreme Court of Canada observed 20 years ago:

“Without class actions, the doors of justice remain closed to some plaintiffs, however strong their legal claims.”

A state of affairs that is largely the case in England and Wales today.

Michael Molavi holds the Legal Education Foundation Postdoctoral Access to Civil Justice Research Fellowship at the Bonavero Institute of Human Rights at the University of Oxford. 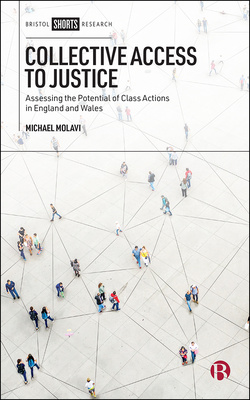 Collective Access to Justice: Assessing the Potential of Class Actions in England and Wales by Michael Molavi is available on the Bristol University Press website. Order here for £34.39.