Mind, action and strategy in conditions of uncertainty

In 2020, as the world was gripped by pandemic, financial instability, extreme weather events and political polarisation, uncertainty became the new normal. The unpredictability of rapid changes with global impact highlighted the difficulty of decision making and action in conditions of radical uncertainty. What happens to agency in conditions that are so unpredictable, where conventional wisdom can within a matter of weeks, or even days, be turned on its head in response to a dramatically changing context?

In my book, Snapshots from Home, I explore the parallel between quantum physics and Daoism, Buddhism and Hinduism, which has been articulated by physicists over the last century, to discover what it might tell us about mind, action and strategy in a radically uncertain world. The project is situated at the intersection of two debates that transcend disciplinary boundaries and would seem on the surface to have little to do with one another: the relevance of quantum theory for the social sciences and the potential for global International Relations.

The social sciences have not been quick to embrace quantum theory. Many scholars remain indebted to the assumptions of classical Newtonian physics, including the emphasis on materiality, locality, linearity and determinism. Others are ambivalent about the added value of bringing science to concepts that already have a place in more critical traditions. There is a further question about the relevance of the theory as anything more than analogy, given that quantum effects are said to wash out above the microscopic level. Yet, Newtonian assumptions are arguably of limited usefulness in a world shaken by uncertainty. The emphasis of quantum theory on indeterminism, entanglement, non-linearity and the matter–consciousness relationship would seem to be more suited to the analysis of a global context of dramatic change.

While the universe is not broken up into microscopic and macroscopic, as is often assumed, the jump from saying something about the activity of subatomic particles – the preoccupation of quantum physicists – to saying anything meaningful about the kinds of social and political problems humans currently face, is a quantum leap. Buddhism, Daoism and Hinduism provide a reservoir of knowledge, developed over millennia, related to questions of mind, action and strategy in conditions of uncertainty. They also provide a seamless transition between quantum science and macroscopic patterns and forms of life. Both quantum physics and the ancient traditions shift away from the classical focus on the material properties of ontologically separate objects or individuals, that is, their ‘thing-ness’, toward an epistemology/ontology of entangled relations, within which polar opposites are complementary, and from which difference emerges out of a dynamic process of mutual constitution.

The parallel further makes it possible to address a disciplinary blind spot arising from the origins of International Relations in the UK and US, the centres of global power over the last few centuries. Approaches that build on systems of thought beyond the West are often dismissed because they are associated with culture and thus assumed to have little to say about the universal truth of science. One consequence has been an absence of attention paid to other voices and systems of knowledge, many discredited or silenced with imperial expansion, in shaping how a purportedly global phenomenon is understood. The parallel approaches the science–culture relationship from a different angle, thereby expanding the potentials of the global IR debate and raising questions about who ‘we’ are, what we do and how this relates to the doing of others in an interconnected globe and universe. As such, Snapshots from Home is a thought experiment that asks us to momentarily step out of ourselves and what we assume to be normal, in order to look at the world from a different angle that may assist in rethinking how we navigate the potentials of the post-pandemic world.

A series of ‘snapshots’ together approximate a multidimensional hologram, albeit imperfectly, as a way of engaging with a non-linear phenomenon. A hologram is a multidimensional image wherein everything is infused with everything else and the contours of each pixel are reproduced in the whole. The idea of a snapshot of the same object from different angles is a contemporary variation on the statement from the Hindu Rig Veda, the oldest of the Vedas, that ‘truth is one; people call it by different names’. The Daoist imagery of walking around a mountain and watching the light shift along with the movement and the changing geography, weather or time of day, provides further insight into the significance. The mountain represents a whole, which is at the same time part of a larger whole – a mountain range; what is seen by the observer, as her location in time and space changes, is always partial. The shifting apparatus moves toward a more complete view, even while its capture is beyond the realm of the possible.

A thread connects the different parts, which move from self and mind, to action and strategy, to structure and time, peeling back the various layers of the problem in order to reflexively engage with the societal cracks revealed by the pandemic. Each snapshot unpacks a conceptual parallel between the ancient philosophies and quantum physics in relation to a specific context, present and past, at the intersection between East and West. What is the significance of quantum impermanence and Buddhist conceptions of emptiness for understanding the ‘self’ as both individual and relational, and what is its relevance for IR? What does the paradoxical practice of Zen Buddhist ‘no mind’ in a context of 19th century war tell us about speedy effective action in highly unpredictable circumstances, or about healing the trauma of those who fought in contemporary wars in Iraq or Afghanistan? What is the significance of quantum complementarity and a Daoist concept of ‘actionless action’ for rethinking assumptions about climate change?

What would the strategist Sun Tzu have to say about navigating the dramatic reversal of opposites that has characterised the war against COVID-19? How do we understand action within relational entanglements of power across time and space? What does it mean to say that Gandhi, a subject of British empire, enacted a different world of Indian independence? What did the murder of George Floyd by a white police officer reveal about the persistence of habits of power long after the formal structures of enslavement have been abolished? Against the backdrop of climate change, pandemic and a rising China, what are the potentials to rethink the habits of International Relations in order to navigate a qualitatively different way of living together on the planet?

Alex Wendt asked whether humans can ever be at home in a purely materialistic Newtonian universe. Snapshots from Home asks a question about what it might mean to be at home in the universe. It was written from home, during the pandemic, at a time when much of the world was confined to home, if in varying circumstances. As the house is burning down, with ever more frequent ‘weather events’, and a pandemic for which ‘we’ are responsible, it seeks to reposition the apparatus to see something different than normal, and to ask who ‘we’ are and how we might reimagine ourselves and a global home before it is too late.

K.M Fierke is Professor of International Relations at the University of St Andrews. 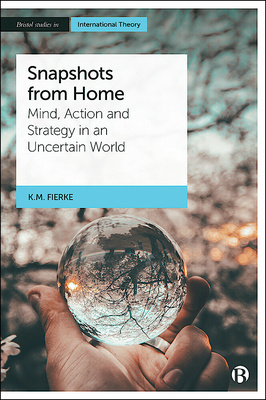 Snapshots from Home: Mind, Action and Strategy in an Uncertain World by Karin M. Fierke is available on the Bristol University Press website. Order here for £22.39.