Prior research on human trafficking has documented trafficking routes, generated estimates of the problem and evaluated legal policies. In doing so, it has documented the importance of factors such as economic- and gender-based inequality, globalisation, corruption, conflict and migration.

Although existing research has identified these issues as some of the main factors that drive human trafficking, relatively little is known about how these factors may combine in unique and important ways across various geographic locales. A lack of comparative analyses by region is problematic because it has meant that researchers and policy makers have largely assumed that the conditions that drive human trafficking are the same across entire regions and that the same solutions can be applied cross-nationally.

To appreciate how the drivers of human trafficking may combine differently across areas, it becomes important to understand where these factors originated from within each country. My book analysed neoliberal economic policies from the IMF and World Bank throughout the 1980s and 1990s to show that they had a long-lasting and negative effect on many countries, contributing to the growth of the root causes of human trafficking and therefore the issue of trafficking itself. Neoliberalism is defined as political economic practices which emphasise that individual wellbeing is advanced through the state’s role in protecting an individual’s liberties such as private property rights and freedoms associated with markets and trade. Global neoliberalism emphasises individualism, competitiveness and open marketisation while ignoring the ways that structural inequalities associated with exploitation and poverty are often made worse by such an ideology.

To better understand these issues, I conducted historical and comparative analysis on countries from three regions (Sub-Saharan Africa, Southeast Asia and South America), selected for their importance as source countries.

In Cambodia, a plethora of IMF and World Bank neoliberal economic policies worked to shape the direction of their economic transition following rule under the Khmer Rouge and Vietnamese. However, local governments and organisations were denied a role in this transition, and international donors maintained heavy influence over policy. I make the argument that the role of international financial institutions and foreign governments in Cambodia’s transition to democratic capitalism represents a form of market colonialism through which the broader consequences of economic reform are overlooked through the lens of neutral market forces. Such economic policies have disintegrated social safety nets and worsened inequality. The responsive migration flows toward Thailand have placed many individuals in situations of exploitation and trafficking. Anti-trafficking efforts in Cambodia have focused on sex workers without distinguishing genuine victims of trafficking, exacerbating the stigma associated with sex work, and ignoring labour trafficking and its association with migration for work.

Bolivia provides a unique case study, given its history of social protest against the neoliberal economic measures associated with the IMF and World Bank. Closer historical examination, however, shows that the quality of social expenditures on services such as health, education and employment have not worked to alleviate inequality. Instead, as globalisation and an economy centred on neoliberal accommodation has persisted, economic and gender inequalities have persisted as well. Transnational corporations continue to play a large role in extractive industries, and Bolivia remains reliant on their foreign capital. Such actions often come at the expense of indigenous communities who are already vulnerable. Furthermore, various Bolivian governments over time have not been successful in addressing corruption. Altogether, this situation has spurred migration and, relatedly, human trafficking. Anti-trafficking initiatives in the country have focused on law enforcement and stricter border controls. However, regulating and restricting migrants’ movements has often had the indirect effect of making them vulnerable to human trafficking and undermining the protections available to them in their destination country.

Analysis of Gambia focuses heavily on the role of state instability. Neoliberal economic reforms were intended to stabilise the country’s economy for entrance into the global market. Instead, Gambia experienced increasing political, social and economic instability. Life under President Jammeh’s rule was marked by violations of the political, civil and social rights of Gambia’s citizens. Reliance on external creditors and worsening inequality and discrimination acted as push factors for individuals to migrate ‘the back way’ through Nigeria and into Europe. Together with corruption, this has placed many young people in particular at risk of human trafficking. The response to human trafficking in Gambia has lacked the money and resources needed to enforce new legislation. Moreover, corruption undermines what little state action is taken on the issue.

Today, the imposition of neoliberal capitalism on a global level has meant that in order for countries to receive aid, funding and development money from these international financial institutions, their economies must be structured in accordance with neoliberal ideology. My research shows how structural adjustment programmes, poverty reduction strategies and more, put in place in emerging economies, have the outcome of increasing inequality and corruption, eroding social welfare and democracy, and overlooking the unique needs of a country. It is through this coercive economic approach, justified by free market neoliberal ideology, that the conditions conducive to flows of both migration and human trafficking emerge.

Comparisons demonstrate that although each of these countries experienced economic adjustment through IMF and World Bank policies which had long-term impacts, there is no singular solution to human trafficking that can be easily applied across all regions. Instead, human trafficking can now be contextualised within larger geospatial issues. This includes being able to examine how the conditions that drive trafficking are functions of larger socioeconomic and sociopolitical forces that extend from the global to the local.

These findings also challenge traditional thinking about human trafficking solutions. Frequently, anti-trafficking efforts have proceeded from a law-and-order viewpoint, focusing on controlling the crime through the criminal justice system. This research demonstrates, however, that human trafficking is frequently grounded within a broader context around work, inequality and migration. Such criminal justice efforts often focus on criminalisation of migrants, strict border controls and elimination of sex work. But these efforts fail to address the underlying factors that lead to migration and vulnerability. Instead, anti-trafficking initiatives need to be localised and specific, addressing the specific needs of victims, while also working to protect migrants and increase agency.

Sarah Hupp Williamson is Assistant Professor at the University of West Georgia. 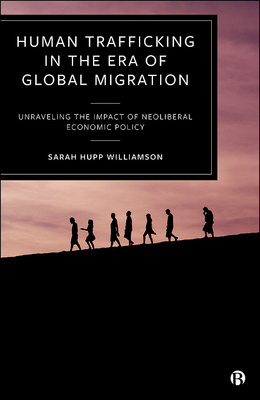 Human Trafficking in the Era of Global Migration: Unraveling the Impact of Neoliberal Economic Policy by Sarah Hupp Williamson is available on the Bristol University Press website. Order here for £22.99.