by Jon Burnett Ida Nafstad and Lisa White
31st May 2022

After a brief hiatus, Justice, Power and Resistance, the Journal of the European Group for the Study of Deviance and Social Control, is relaunching with the special issue: Pandemics, policing and protest. This special issue is published against a background of ongoing crisis and controls.

At the time of writing, 485,275,045 cases of COVID-19 have been recorded worldwide, and 6,133,718 people are known to have died, according to the Johns Hopkins University Coronavirus Resource Centre (2022). In addition to these deaths, responses to the virus have created immense harm and suffering. They have facilitated the further growth of solitary confinement in the penal estate and impacted upon the relationship between those detained and the ‘outside world’. Other responses have also included further restrictions on freedom of movement and the ‘enhancement’ of border controls, the strengthening of police powers and significant increases in the levels and forms of surveillance experienced by the public.

The management of this crisis has provided further evidence of the economic violence of capitalism, as more and more people are forced into poverty, insecure and/or unsafe accommodation and homelessness, while the health risks and dangers associated with work and the workplace have become heightened. Responses to the COVID-19 crisis have increased and strengthened preexisting social, political and economic inequalities, particularly in relation to age, (dis)ability, sex, ‘race’, class and their intersections. Preventable deaths of older, sick and (dis)abled people have taken place in ‘care homes’, while lockdown conditions preventing people from leaving their homes have contributed to rising levels of intimate partner violence. Deaths have further disproportionately impacted Black, Indigenous and People of Colour (BIPOC) communities. Restrictions around access to healthcare, the closing of schools and public transport networks, along with limits on the use of public spaces, have also impacted unevenly across societies across the world. While notions of a ‘herd immunity’ have continually suggested that some lives are expendable, this has been further reinforced in different ways – particularly as it is frequently those from racially marginalised communities who have been categorised as essential workers and disproportionately exposed to the COVID-19 virus in the process.

In a recent media interview with Ava DuVernay, Angela Y. Davis stated that the current moment marks ‘a conjuncture between the COVID-19 crisis and the increasing awareness of the structural nature of racism’. Ongoing inequality, discrimination and state violence can be seen in the high-profile killings by state agents, particularly of Black women and men. The police killings of Breonna Taylor and George Floyd in the US in 2020 further strengthened the social movements gathering under the Black Lives Matter umbrella, and heightened calls for the defunding and abolition of the police, as well as for a critical questioning of criminal justice processes more broadly. These calls are underpinned by an awareness of both the past and present of criminal justice institutions, with their links to colonialism, the preservation of particular forms of social, political and economic order, and their intrinsic reliance upon violence, repression and control. As Vitale argues in The End of Policing, ‘the basic nature of the law and the police, since their earliest origins, is to be a tool for managing inequality and maintaining the status quo’.

Research has repeatedly provided evidence of the harmful biases and inherent violence of the police as an institution, alongside the absence of any causal relationship between the size of a police force and public safety. While women and men continue to die and are harmed at the hands of ‘law enforcement’, it remains important to rethink the provision of police control, not least beyond the reformist calls for community policing, and consider in depth how we can achieve justice, security and safety for all in our communities, both now and in the future through a politics of abolition. Doing so necessarily involves thinking of policing in its broadest terms and widening the focus beyond simply the police force and towards the inclusion of other agencies of control and repression.

The relaunch issue of Justice, Power and Resistance seeks to challenge dominant discourses around power which frame harms as unavoidable outcomes or unforeseeable consequences. It hopes to raise questions about the use of the police during a health crisis, but also about the use of policing more broadly as a response to problems. This issue demands that we critically interrogate inequality in all its forms, and the institutions and discourses that perpetuate it.

Access the relaunch issue of Justice, Power and Resistance for free until 31 July here. 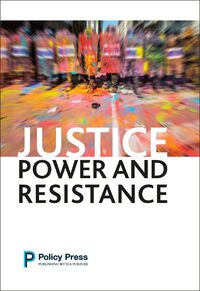 by Jon Burnett Ida Nafstad and Lisa White
31st May 2022