A time for radical empathy

We are once again at a moment in history where people are in the streets calling for racial justice. George Floyd is another name in a long line of African Americans who have lost their lives at the hands of the police, those who are supposed to “protect and serve”.

In order to understand this moment and why it has led to such a strong response by the public, it is important to understand that these are not random incidents. There are patterns in police behavior and research indicates that African Americans are more likely to die in fatal incidents than whites.

For many, white supremacy is seen in the extremes of racism, for example white nationalists, the Klu Klux Klan and neo-Nazis. However, it is important to understand that white supremacy is something that has been baked into the culture and politics since the first African slaves landed at Point Comfort 400 years ago in 1619. That original sin continues to play a role in the America that is struggling with issues of racism and inequality today. My concern is that there are many people, including African Americans, who are impacted by white supremacy and don’t understand the impact it has on them and others. We want to see the structures we have in society as neutral when they are anything but.

My experiences navigating through a mostly white world has made me realize that the divides in our country are many. Race, class, gender and religion are all sources of division not only between groups but within groups. I have come face to face with racial resentment not only from white people who are racist, but also from people who felt that I didn’t fit into the mold of their idea of what it means to be a black person.

We are overdue for an era of radical empathy. Racism has taken a toll on those of us from a generation that was steeped in the mythologies of racial progress that developed in the 1970s, after the victories of the civil rights movement. Those mythologies told us that we had gained so much, and that we were close to gaining equality, at least for some of us. The fact is that many are still struggling and increasing inequality over the last 40 years shows us how far we have to go.

Radical empathy is moving beyond walking in someone else’s shoes and requires taking actions that will not only help that person but will also improve our society. Practicing radical empathy can provide real change in people’s lives, but I would emphasize the word practicing – having empathy is different from practicing empathy. I believe the persistence of white supremacy has to do with the fact that many people of color lack empathy for themselves, and many allies have empathy, but do not take that next step to radical empathy that would lead to the actions needed to create change.

Radical empathy isn’t only for people one might consider racist. Many of us have internalized our oppression and developed our own biases. Empathy is a practice, not a state of being. It is true that some people are better able to practice empathy than others, but most people are capable of some form of empathy. It is important to understand that having empathy is important, but it doesn’t necessarily lead to action or change. Social justice will not happen because we are nice to each other. Getting to radical empathy is a path which I have separated into six distinct steps:

It is possible to expand one’s capacity for empathy by practicing it towards people around us, even strangers. There are people we encounter every day who may have a different life than our own. What is it like to put yourself within the consciousness of a stranger? What does this person wish for? What are some of the losses or disappointments they may have encountered in life? What are their hopes and aspirations? If you can focus on the commonalities that we all share, it is a reminder that there is more that unites us than divides us. 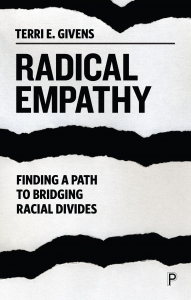 Radical Empathy by Terri E. Givens is available for pre-order on the Policy Press website. Pre-order here for £15.99.