How Iran is battling with economic sanctions and COVID-19

The Islamic Republic of Iran is going through the most challenging time since its establishment in the 1979 Revolution. The devastating impact of the sanctions imposed by the US and the effects of the COVID-19 pandemic have taken a toll on Iranians, especially the poor. When Donald Trump became US President in 2016, he withdrew from the Joint Comprehensive Plan of Action (JCPOA), a negotiated nuclear agreement between six leading global powers (US, France, Britain, Germany, Russia and China) and Iran. This was supposed to end Iranian nuclear enrichment and bring the country closer to the West.

Instead, Trump threatened any countries or companies in the world that continued commercial activities with Iran with huge fines. Fears of harsh penalties by the US have forced countries around the world, including so-called friends of Iran such as China and Russia, to stay away from dealing with the Islamic Republic. The commercial activities of these countries with the US have been much greater than with Iran, so it was not a difficult decision to make. As a result, Iran was forced to resort to the use of illegal methods to import the commodities it vitally needed, at higher costs, and export its oil at a lower price. This, together with the outbreak of COVID-19 and the global recession brought on by it, has lowered the global demand and prices for oil, making Iran’s leaders anxious about how to manage the nation’s shattered economy.

The economic consequences have been harmful, with inflation reaching nearly 50 per cent, while unemployment stands at nearly 10 per cent, and among youth at 25 per cent. Real GDP, which declined by 6.8 per cent in 2019, is now below zero.

The oil industry, which is the heartbeat of Iran’s economy, accounting for over half of its exports, has also suffered. Prior to the US’s withdrawal from the JCPOA, Iran was exporting 2.5 million barrels a day. This has now been reduced to fewer than 1 million. Iran’s currency has dropped in value more than five-fold against major currencies.

However, these terrible economic conditions are not a result of US sanctions alone. The Iranian ruling elites have mismanaged the economy, on top of the pandemic taking its toll. The regime appears to have made a political miscalculation by signing the JCPOA, and by hoping that Iran’s closer relations with the global community would support its ailing economy.

Worrying about growing popular resentment, the Islamic Republic has continued to subsidise staple goods such as bread and eggs, but even the prices for these commodities are beginning to creep up, while the government’s funds are shrinking fast. According to official figures, as many as 57 million people, or 75 per cent of Iran’s 82 million, are now living in poverty.

The onslaught of COVID-19 began immediately after it started in China in December 2019. While most of the world’s airlines halted flights to China, Iran’s continued to move passengers and goods in and out of China, ignoring numerous warnings of the impact of the pandemic. They even allowed open parliamentary elections with few precautions in February 2020, and the festivities celebrating the Islamic Revolution went ahead because they were important politically, as a manifestation the regime’s legitimacy.

At the beginning, the regime saw the wave of COVID-19 infections as providing a needed respite from the growing internal political pressure that it was under as a result of the increasing political protest at the time, which had shaken the country in December 2019 in response to the increase of domestic petroleum prices.

However, the government soon realised the severity of the problem, as the pandemic became unmanageable. Scores of government ministers, officials and clerics tested positive and some died. The government decided to close schools and universities, asking people to avoid unnecessary travel. The respite was short-lived, however, as the virus started spiralling upwards again in September 2020. The government is now faced with an impossible dilemma, as it cannot afford to shut down the economy for long periods of time, which would make the situation even worse economically. The number of cases, according to official figures, has reached 550,490, and the number of deaths is now 33,000 since the outbreak. The country is now going through the third, and so far worst, wave of this pandemic.

Over the last 42 years, the Iranian regime has looked to the ideological appeal of Islam to maintain its relative domestic legitimacy, while blaming the US for the country’s economic problems. On the national stage, the key pillar of the Revolution was anti-imperialism, fuelled by the memory of the Pahlavi regime being a close ally of the US. Iranian leaders have continually claimed that the US is engaged in a criminal act in trying to force Iran to behave like other Gulf states or else face harsh sanctions. The Islamic Republic has used this to legitimise its shortcomings economically, politically and socially, blaming external forces for its own incompetence.

Over the next few months, both the US and Iran will have presidential elections. These may have consequences for the political landscape of the Middle East, depending on who is victorious. The desperate and weak regime in Iran is facing huge challenges at home, in the region and globally. The normalisation of relations between the UAE and Bahrain and Israel also poses a major challenge to regional players such as Iran and Turkey.

Regardless of who becomes president in Iran and in the US, a resumption of negotiations between the two countries after the elections seems very likely. The Islamic Republic has nearly reached a dead end, with its legitimacy at the lowest point since the Revolution. Given the Islamic Republic’s precarious situation, the exhaustion of both ‘reformists’ and ‘hardliners’ and the bickering between them, major changes are expected from within. This is hopeful for the struggling Iranian nation, with an embattled regime and the devastating economic hardships imposed by both sanctions and COVID-19.

Farhang Morady is Principal Lecturer in International Relations and Development in the Centre for the Study of Democracy at the University of Westminster in London. 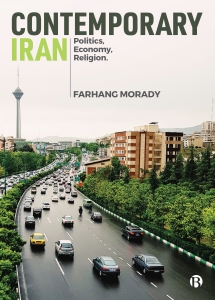