It is not easy today to take an interest in the future of the planet, and especially in human civilisation, without becoming bewildered. On the one hand, bad news piling up about climate change, biodiversity loss and widespread pollution leads us to fear the worst. On the other hand, futurologists, economists and entrepreneurs declare their faith in a new industrial revolution based on artificial intelligence and renewable energy, promising to increase life expectancy while aspiring to colonise space and interact with machines. Between the risk of collapse and a dazzling future, what should we believe?

These questions are not new. From the end of the 1940s, debate raged between self-proclaimed ‘neo-Malthusians’ and ‘cornucopians’. The former, often coming from the natural sciences (William Vogt, Henry Fairfield Osborn, Paul Ehrlich, etc.) believed that the combined effects of population growth and consumerism would soon bring humanity to the brink. The latter, social scientists (William Nordhaus, Julian Simon, etc.) and self-proclaimed futurists (Herman Kahn, Alvin Toffler, etc.), advocated the contrary view that increasingly rapid technological progress would wipe out all threats of shortage.

The debate intensified after the publication of The Limits to Growth, the 1972 report by the Massachusetts Institute of Technology (MIT) team of Donella and Dennis Meadows to the Club of Rome on the impact of economic and demographic growth. But then, in the 1980s, it faded. The risks of shortages seemed to recede, with an apparent long-term downward trend in the price of raw materials: oil halved in price between 1984 and 1986, and remained low until 2003, when it began a spectacular recovery; the price of metals collapsed in the wake of the fall of the USSR and the release onto the market of strategic stocks freed up by the end of the Cold War. Worries re-emerged in the mid-2000s, especially concerning climate change, a possible global oil peak and pressure on raw material markets from the rapid development of emerging countries, led by China.

It was of course the prospect of technological progress that made the cornucopians so optimistic. It promised a move from environmental destruction to ‘green’ growth, more respectful of ecological balances, and maybe even restorative (cleaning of the oceans and soils, climate regulation by geo-engineering, etc.). In this vision, fossil fuels would be replaced by renewable energy, use of metals would be reduced at source through new and more efficient processes, ecodesign and substitution of renewable materials such as biomaterials, or through reuse and recycling in a ‘circular economy’.

In these ways, the economic system could be ‘dematerialised’ and economic growth could be decoupled from resource consumption. As early as the end of the 1930s, the architect Buckminster Fuller spoke of ephemeralisation (technological advancement that allows humans to do ‘more and more with less and less’). There are examples of where this has happened. Radio waves or optical fibres based on abundant materials have replaced copper cables. With economic development, the contribution of industry is being reduced in relation to services and the ‘knowledge economy’.

But the actual figures are less persuasive – there has been a relative decoupling between gross domestic product (GDP) and energy consumption and CO2 emissions, but absolute decoupling needs to be achieved for emissions to fall while GDP grows. As for mining and metallurgical production, there has been no slowdown; quite the opposite. How can we continue such trends over the medium and long term? A growth rate of 2 per cent per year implies a doubling every 37 years, a multiplication by seven in a century, and by … 390 million in a millennium! Without decoupling, the indefinite growth hoped for by economists is revealed as a charade or science fiction. Is it reasonable to think that we can ‘progress’ in our consumption of energy and materials to the point of becoming millions of times more efficient? It must surely be in doubt.

We only need to play around with the exponential relationships a little to show that the ‘grow or die’ view of our economic system is absurd. In some cases, we don’t even need to think in terms of exponentials: if we maintain the current rate at which we are gobbling up agricultural land, it will take us only a few centuries to completely cover Europe with concrete and steel, to be like the planet Trantor, capital of Isaac Asimov’s Galactic Empire.

Clearly – and fortunately – this will not happen. Current trends will have to be reversed at some point. Whatever their size, the exploitation of existing stocks will have to peak and then decline. The law of diminishing returns will catch up with us: more and more energy will have to be devoted to extracting hard-to-reach resources, and more and more resources to capturing less concentrated or more intermittent energy, with recycling processes that will remain very imperfect. But how devastating will this turnaround be? Will it be a collapse or a de-escalation, a catastrophe or a gradual descent, punctuated by local or global shocks?

In terms of the environment, the stakes are high: halting the loss of biodiversity will be very difficult; the outlook for climate change is bleak, terrestrial and marine food chains are seriously contaminated. For other issues – food production, the availability of energy and the services that go with it (water, sanitation, health, mobility, etc.) – the likelihood of sudden collapse, in the short or medium term, is less clear. But we can certainly fear the fragility of the banking sector, the growing resistance of microbes to antibiotics, the combination of dense populations and extreme mobility exposing us to further pandemic risks, the political instability of certain geographical areas or certain states, and the lack of resilience of globalised production systems.

Could scarcity of resources (peak oil, for example, followed by a rapid decline in energy availability) cause a widespread collapse? On the one hand, we are currently so profligate that we have scope to drastically and rapidly reduce our needs without a return to the Stone Age. On the other, extractivism still has a long way to go in destroying the planet, digging deeper everywhere, sucking up the bottom of the oceans, queuing to attack the Antarctic ice crust… There will be unprecedented environmental consequences, but so what? Sadly, since the ‘industrial machine’ has to be fed, we can expect only token concessions to the protection of nature. As far as destruction is concerned, ‘we’ will stop at nothing (while claiming to be ever ‘greener’, of course), and we probably haven’t seen anything yet.

There is, however, another inescapable phenomenon: shifting baselines, the phenomenon described by biologist Daniel Pauly when writing about estimated fish stocks. Scientists take as a reference point the state of stocks and the composition of species they knew at the beginning of their career. For new generations, reference points shift as stocks decline. This concept can be applied to the environment (we speak of environmental amnesia: children don’t panic about the lack of butterflies, nor Greeks about the absence of lions), but above all it can be generalised to other areas of perception, of life, of morals and of values. It explains why one generation may be unable to transmit its experience to the next in a sufficiently precise, lived way, and thus the limits in awareness, from a ‘societal’ point of view, of the major but progressive changes around us. And it works in both directions, for degradation or improvement.

How, and at what rate, will the human population adapt itself to the limits of a finite world? Many geographical, economic and social factors are at play: the political regimes in place, the sense of urgency felt by the population (people accept more easily when they are fearful), the level of social justice (limitations and frustrations will be felt differently according to living standards and inequalities in a particular society). One can imagine scenarios where there might be authoritarian measures such as rationing. Or adaptation might be gentler, with delisting of medicines, increases in life insurance costs, lower pension rates, etc. But everything – work, housing, travel, education, health care – will necessarily become a little more difficult, more unpleasant and more uncertain.

Rather than waiting fearfully for societal collapse, we will have to learn to be stoical. But the shifting baseline syndrome may help future generations to cope with the undoubtedly more precarious conditions of environmental degradation and an increasingly artificial world, by shifting the perception of what we call a good life in almost indiscernible ways.

Philippe Bihouix is an independent author and engineer. He worked for 25 years in various industrial sectors including construction, energy, chemicals, transport, telecommunications and aerospace, in Europe and Africa. He is a member of the Institut Momentum, a French thinktank on the Anthropocene, ecological overshoot and transition. 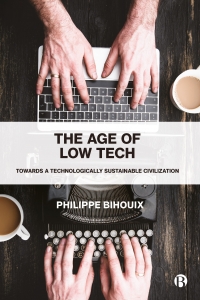 The Age of Low Tech: Towards a Technologically Sustainable Civilization by Philippe Bihouix is available on the Bristol University Press website. Order here for £9.99.