Exposing the inequality of housing during the COVID-19 pandemic

Despite property owners’ attempts to exploit the legal system, a community group of activists exposed the inequality of housing during the COVID-19 pandemic, providing a vehicle for the working classes to obtain change.

Many people are drawn to Oxford and its surroundings for the education and work opportunities in its leading universities, hospitals and car manufacturing industries. With a high proportion of both expensive mansions and social housing, the ability to obtain safe secure accommodation in the private rented sector is difficult.

In 2017, the Independent declared Oxford to be the most expensive place to live in the UK, and in 2020 it was the third costliest city in which to set up home, according to a survey in the Oxford Mail. Ignoring fees added by letting agents and utility bills, in 2021 housing in Oxford itself started at £270 per week for a one-bed studio apartment and at around £136 per week for a room in a shared house. A cheaper alternative is to move to a room on the outskirts of the city, which costs from around £100 in a house share. Many properties let through agents are not managed as they should be, but there is little alternative than to accept what is offered.

Acorn was born during the Lib-Dem/Conservative coalition government. Three people in Bristol quit their jobs and used their experience from the Industrial Workers of the World union to establish a movement. Starting with their own money to cover their expenses, they soon obtained funding from David Cameron’s ‘big society’ initiative.

Going back to basics, the group went door-knocking to chat to local people about the issues they faced. From this, a direct-action organisation was established. The union began in the Easton area of Bristol in early 2014, with the main issue being housing. Acorn can be considered a syndicalist organisation in that it advocates direct social action by the working class against the capitalist order. After four years, this example of community syndicalism had established a base of 500 paid-up members.

The group was split into branches undertaking three core activities: outreach, member defence and campaigns. Outreach is the basic union activity of mobilising people from the organisation to uncover the key problems in an area. Once these are established, member defence starts. Acorn set up deliberately winnable goals to create a cycle of victories to give weight to campaigns for local reforms such as the lack of landlord licensing.

Over in Oxford, a weapon for challenging landlords was first discussed by a small group in 2019. Following previously unsuccessful attempts to set up a voluntary tenants’ union, the Acorn model was adopted. Joe, the Acorn staff member, provides the professional umbrella to the group, linking resources, coordinating activities and increasing membership. “It works and it’s big, brash, bold and member-led,” he declared.

In December 2020, Acorn Oxford started hitting Oxford Mail headlines with a victory against North Oxford Property Services. An Oxford University tenant in a property rented to five students at a rental of £3,300 per month had been asked to vacate her spacious bedroom as it was claimed no House of Multiple Occupation (HMO) licence existed. The email requesting this action also asked the tenant to secure the old room, once emptied of her possessions, with a padlock. After weeks of pressure from Acorn on behalf of the student, the situation was resolved with the tenant paid £200 in compensation.

Another victory for Acorn came in February 2021. A millionaire landlord had not only withheld a deposit from a tenant for five months, leaving him potentially homeless during a COVID-19 lockdown, but had also attempted to deduct £1,433 from the money he owed the tenant. With pressure from Acorn and 120 messages of support for the tenant from members, the landlord was compelled to return the deposit along with an additional amount. 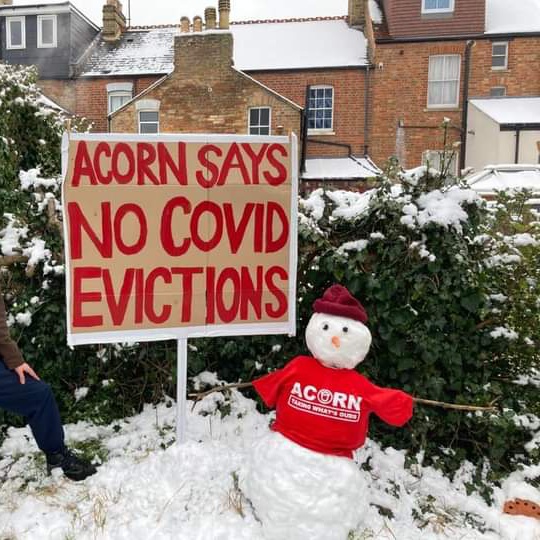 On 3rd March a group of Acorn members went to High Wycombe to undertake a COVID-19-safe defence action protest against the Ryeview Homes letting agent who managed a property of a family in Oxford. The tenants had been threatened with a no-fault eviction after complaining about having to live with rats in a damp property. This in a period of a government ban against evictions due to the pandemic, and with no acknowledgement made of the male householder’s job as an NHS porter.

Acorn member Chelsea expressed her anger when the police arrived at the protest: “The presumption was the police had been called due to Covid and protesting, yet apparently the letting agent had claimed criminal damage had been done to a window. The police did not even look at the window and seemed confused about what they were actually doing, and on noticing one of the group with a red banner on a pole, the police shouted at them not to do any more damage and arrested two people, taking into overnight custody the person carrying the Acorn banner”. With the arrested member released the next day with no charge, Acorn are demanding a withdrawal of the eviction notice, a control of the rat infestation and £5,000 in compensation.

Speaking about her attitude towards Acorn, Chelsea said: “Of all … online support groups with whom I have been involved politically, Acorn has the best chance of making political change for people. Beyond protest these are the right tactics and strategies with achievable goals.” This is reiterated by Joe who said: “The Acorn model could be used on more or less any issue to bring change.”

This type of movement, in the current context of mistrust of mainstream political parties that has emerged from Brexit and COVID-19, has the potential to change UK politics fundamentally.

Tim Wakeman has worked in housing and studied Social & Political Studies at Ruskin College. He is engaged with Housing Activists such as Focus E15 and more recently Acorn and writes articles and short essays on housing, activism and current politics.